U.S.-Japan relations are “in great shape – better than they’ve ever been,” says prominent American official and Japanophile Daniel Russel

In an interview with BuzzFeed Japan, U.S. Assistant Secretary of State Daniel Russel reflects on Japan-U.S. relations past and future, touching on the Trump administration 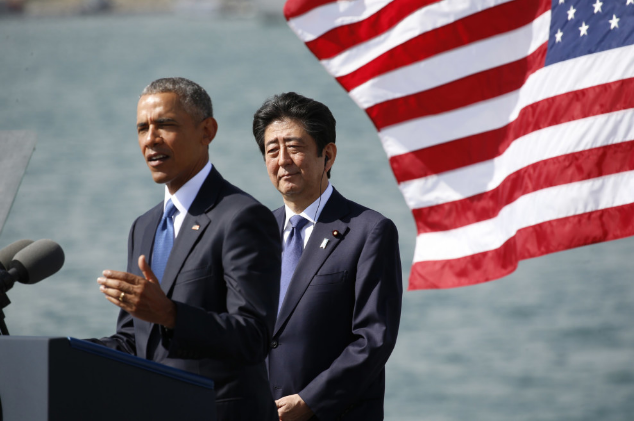 The leaders of Japan and the United States visited Pearl Harbor, Hawaii, on Dec. 27 (early morning of Dec. 28 in Japan), some 75 years after the attack on Pearl Harbor and 71 years after the end of World War II. This marked a turning point in Japan-U.S. relations.

Ahead of this visit, BuzzFeed Japan interviewed Daniel Russel, U.S. Assistant Secretary of State for East Asian and Pacific Affairs.

Russel, who has been involved in Japan-U.S. relations for 30 years, described this Pearl Harbor visit as “dramatic act of closure, another important step forward in what’s been an extraordinary process of reconciliation.”

He is married to a Japanese woman and speaks Japanese as well. He has been a leading pro-Japan U.S. official involved in Japan-U.S. ties since the “Ron-Yasu era” of Prime Minister Yasuhiro Nakasone and President Ronald Reagan.

War generation linked Japan and the U.S. in the 1980s

Shintaro Abe was Japan’s foreign minister when Russel first worked in Japan. “His private secretary was today’s prime minister, Shinzo Abe. We had connections like that from those days,” said Russel with a smile.

The 1980s was dubbed the “Japan as No. 1” era as the country had passed through the period of high economic growth and had plunged into the bubble economy. In those days, “there was a lot of confidence on the Japanese side.”

Russel pointed out that the war generation played a major role in Japan-U.S. relations then. “In those days, so many of the senior business leaders had personal experience of World War II. All of them had experienced the devastation, the poverty, and the suffering of the late war years and the postwar years.”

Did they have resentment toward America? Russel doesn’t think so.

“Quite a few of them had gotten their first big chance in business traveling to the United States. Later in life, as they were more successful, they tried to repay as friends of the U.S.”

“I remember being struck by the fact that, even though some of these senior people – they were then in their 60s or 70s – had experienced terrible suffering as their homes in Tokyo were destroyed by fire bombings and food rations were insufficient, there was no bitterness toward the United States, just a really enthusiastic embrace of the U.S.-Japan relationship.”

“U.S.-Japan relations are “in great shape – better than they’ve ever been”

In 2013, Russel became Assistant Secretary of State for East Asian and Pacific Affairs and helped formulate the Obama administration’s “pivot to Asia” policy.

Regarding President Obama’s foreign policy, Russel said the administration has strengthened relations with Japan and South Korea and focused on international frameworks like ASEAN, APEC, and the G-20.

Turning to U.S.-Japan ties, Russel said relations are “in great shape – better than they’ve ever been,” citing Prime Minister Abe’s speech to the U.S. Congress in April 2015, President Obama’s trip to Hiroshima in May 2016, and the two leaders’ visit to Pearl Harbor.

Tensions with China suddenly spiked after Trump had an unprecedented telephone conversation with the president of Taiwan even though he has not yet taken office as U.S. president. During the presidential campaign, Trump repeatedly made “America-first” statements, hinting that he would withdraw the U.S. military from Japan and South Korea and permit Japan to have nuclear weapons.

This appears to be very different from the “focus on allies and international frameworks of Obama’s foreign policy.” How will ties between the United States and Asia develop in the future?

He went on to say: “Right now we can collect clues and data points, both from what candidate Trump did and said on the campaign trail and what president-elect Trump says and does in the transition period. But ultimately what matters is President Trump post-January 20 (when he will be inaugurated as president).”

There was a change in policies and statements before and after inauguration in the case of President Obama, as well. In other words, it remains to be seen how many of the extreme statements Trump makes before assuming office will be adopted as actual policies after he becomes president.

“It is urgent that Japan utilize women”

At the end of the interview, Russel was asked as a longtime friend of Japan for his advice for Japan going forward. He spoke in Japanese here.

“Sore wa muzukashii [That’s a hard question],” he said in fluent Japanese with a wry smile.

“Women make up half of Japan’s population. I’m wondering if Japanese society, businesses, and politics are fully utilizing women. My personal advice is that Japanese companies should hire female employees with the intention of turning them into CEOs. I hope that the government quickly implements such measures as establishing more daycare centers (which would help women participate more in society).”