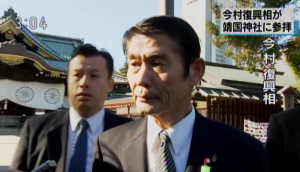 NHK reported at 3 p.m. news that Minister for Reconstruction Imamura visited Yasukuni Shrine this afternoon, saying that he tossed money into a donation box and bowed deeply in front of the hall of worship of the main shrine. He was quoted as telling reporters after the visit: “I went there to report on my work this year and express my appreciation as well as to pray for the safety and prosperity of our nation. I visited as a citizen, a member of the Diet, and a member of the cabinet.” He reportedly explained that he donated his own money. When asked by a reporter about the timing of his visit to the shrine, which coincided with Prime Minister Abe’s visit to Pearl Harbor, he reportedly replied: “It’s just a coincidence. I came here because today is the last business day of the year. There is no connection with the prime minister.” The network added that Imamura also visited the shrine in August, right after he took office.