The Nikkei Inc. and TV Tokyo conducted a spot public opinion poll on Dec. 28–29 following Prime Minister Abe’s visit to Pearl Harbor with U.S. President Barack Obama to console the souls of the victims of the 1941 surprise Japanese attack on the U.S. naval base. The approval rating for the Abe cabinet stood at 64%, up 6 percentage points from the previous survey taken in late November, marking a 38-month high. An overwhelming majority of 84% welcomed Abe’s visit to Pearl Harbor, helping boost cabinet support.

Disapproval of the Abe cabinet dropped 4 points to 26%. By age group, around 80% of respondents in their 30s expressed support for the cabinet, compared to roughly 70% of those in their 40s and around 60% of respondents in their 60s and 70s and older. Approval was 65% among men and 63% among women, up four and nine points, respectively. Cabinet approval among women, which is usually lower than that among men, rose in the spot survey.

An overwhelming 84% of respondents backed Abe’s Tuesday trip to Pearl Harbor, where he paid his respects to victims of the Japanese attack. Only 9% said they did not approve of the trip. Approval was 92% among those expressing support for the cabinet, and a healthy 69% even among those who did not.

Support for the Liberal Democratic Party was at 44%, while 31% of respondents said they do not favor any particular party. Both figures shrank by one percentage point from the previous poll. Meanwhile, approval of the Democratic Party fell two points to a slim 7%.

The telephone poll was conducted on Dec. 28–29 by Nikkei Research Inc. targeting men and women, aged 18 and over, nationwide on a random digit dialing (RDD) basis, including mobile phones [as well as landlines]. A total of 937 valid responses were received for a response rate of 44%. 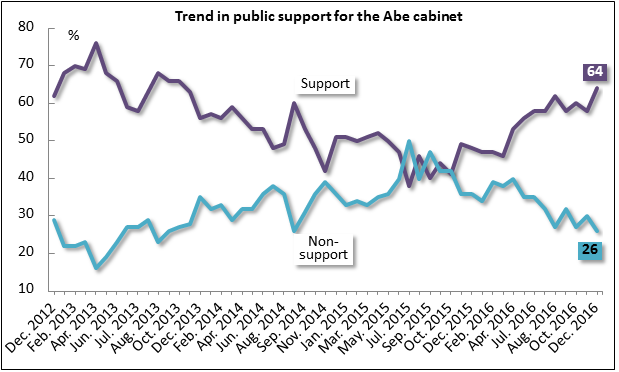