Abe’s diplomacy boosts cabinet support, the question is how to maintain it, Nikkei spot poll

According to the Nikkei Inc./TV Tokyo spot public opinion poll [conducted on Dec. 28–29], Prime Minister Shinzo Abe’s summit diplomacy, including his visit to Pearl Harbor, boosted his cabinet support rate. The poll was conducted immediately after the historic visit while it was still fresh in respondents’ minds, however, and some in the ruling parties are saying that the impact of the visit will not last long. There was notable caution among pollees regarding domestic policy issues, including allowing casinos and reforming the pension system. To stabilize his support rate at a high level, Abe faces various issues in both his foreign and domestic policy.

Respondents in their 40s were most likely to view Abe’s visit to Pearl Harbor favorably, with 93% expressing support. People in their 30s and 50s supported the trip at rates of 89% and 88%, compared with a relatively slim 77% of respondents age 70 and older. More men than women favored the visit, at 85% and 82%, respectively.

Abe hopes to widen his base of support further with a diplomatic offensive in January, giving the LDP the upper hand when the Diet reconvenes in January. The prime minister will call on Australia and Southeast Asian nations on Jan. 12–17. A meeting with Donald Trump after his Jan. 20 inauguration as U.S. president is under discussion for later in the month.

But good results are not assured. During the U.S. presidential campaign, Trump called for Japan to shoulder more of the cost of hosting American military bases, and could initiate a review of how various defense duties are distributed between the two countries. China and South Korea, meanwhile, have railed against Defense Minister Tomomi Inada’s visit on Dec. 29 to the controversial Yasukuni Shrine commemorating Japan’s war dead.

The government and ruling parties are also having a tough time building public support for legislation it introduced in the extraordinary Diet session that ended in December. A sizable 63% of respondents oppose a law speedily enacted during the session allowing so-called integrated resorts including casinos, with just 26% approving of the measure.

Lawmakers will continue work at the next ordinary Diet session on legislation allowing Emperor Akihito to abdicate – an act existing laws make no provision for. The plan currently under consideration would carve out an exception for Akihito only. But just 22% of the public supports such a solution, while 65% say a system should be created allowing any emperor from now on to abdicate. The matter will have to be carefully explained to the public to eliminate the gap between the government and the public on this issue.

Opinions are mixed on whether rising support for the Liberal Democratic Party (LDP) will tempt Abe to dissolve the Lower House for a snap election earlier than he otherwise might. Hiroyuki Hosoda, chairman of the LDP’s general council, told reporters that poll gains did not mean Abe would adjust his plans one way or the other, and said he did not expect an election to be called in January. “Seeking a mandate from the people based on the outcome of a set of diplomatic moves would seem rather strange,” Democratic Party chief Renho said, warning against a rushed election.

But some in the ruling parties expect an early election. “With his approval as high as it is, he will naturally have more options in calling a snap election,” a former cabinet member said. “But the poll numbers could change in an instant,” cautioned an official from Komeito. Abe also must factor in economic and market concerns when timing the election. Stocks in Tokyo experienced a sharp downturn Dec. 29 amid signs of further trouble at electronics maker Toshiba.

[Polling methodology: The telephone poll was conducted on Dec. 28–29 by Nikkei Research Inc. targeting men and women, aged 18 and over, nationwide on a random digit dialing (RDD) basis, including mobile phones [as well as landlines]. A total of 937 valid responses were received for a response rate of 44%.] 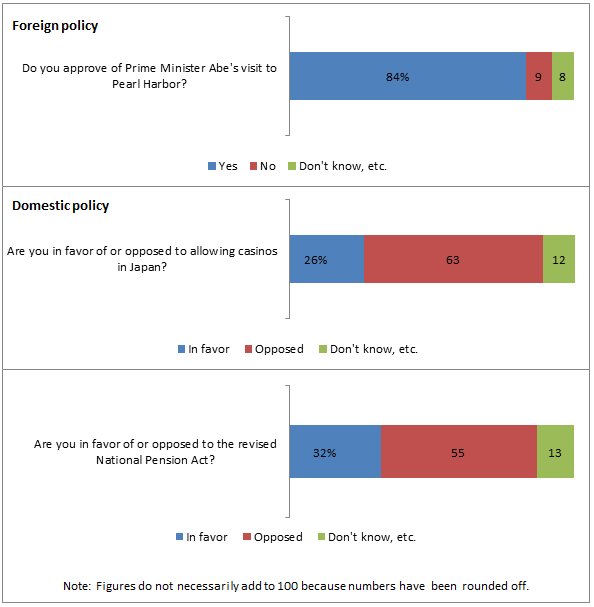