Message from “Sapiens: A Brief History of Humankind” 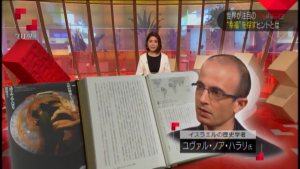 NHK’s “Close-up Gendai Plus” highlighted Israeli historian Yuval Noah Harari’s “Sapiens: A Brief History of Humankind,” which has been highly recommended by such distinguished leaders as President Obama, Bill Gates, and Mark Zuckerberg. Harari argues in the book that Homo sapiens can cooperate flexibly in large numbers because it has the unique ability to believe in things existing purely in its own imagination, such as nationhood and human rights. The program argued that the international bestseller offers hints on how mankind can survive the current times when it is facing such serious issues as expanding economic disparity, terrorism, and internal conflicts by creating a fresh imaginative landscape that will replace capitalism.