High expectations for Hagerty as top U.S. diplomat in Japan 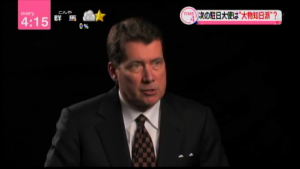 Thursday evening’s NTV and Fuji TV highlighted mounting speculation that William Hagerty may be tapped as the next U.S. ambassador to Japan, voicing hope that he will be as “influential” as his predecessors, including Ambassador Kennedy, who can reportedly speak directly with President Obama over the phone. According to NTV, an unnamed senior MOFA official was pleased with the likely appointment of Hagerty since he appears to be a Republican “heavyweght.” Fuji-TV said the fact that Hagerty’s role in the transition team involves the planning and execution of the process to select over 4,000 presidential appointees shows that he has undoubtedly earned the solid trust of Trump. The broadcaster focused on his connections with Japan, saying he is a wealthy business consultant based in Tennessee, where he once worked for the state government to attract Japanese firms. Former Boston Consulting Group Japan President Koichi Hori, who supervised Hagerty when he worked in Tokyo about 25 years ago, said: “He was a very nice guy. Gentle, friendly, compassionate, and affable.” The Japanese businessman projected that judging from Hagerty’s excellent performance at the time, he will do well as ambassador to Japan.