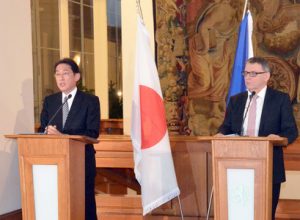 Tuesday’s Mainichi ran a Kyodo report on Foreign Minister Kishida’s meeting with his Czech counterpart Zaoralek in Prague on Sunday, during which the two nations agreed to strengthen economic cooperation. They also agreed to expand cooperation in power generation, including nuclear. Zaoralek stressed during a joint press conference that altering national borders by force can never be allowed, an apparent reference to opposition to Russia’s involvement in Ukraine and China’s military moves in the South and East China Seas.