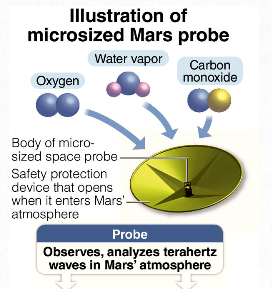 A research team comprising the National Institute of Information and Communications Technology, the University of Tokyo and Osaka Prefecture University, is set to develop a microsized Mars probe.

Japan lags behind in the field of Mars exploration. The team aims to enable frequent exploration of Mars and increase the nation’s presence by developing in a short time a low-cost probe 50 centimeters in length, width and height.

The team will land the microsized probe on Mars to observe oxygen and carbon monoxide and other components in the atmosphere. It will use Japan’s competitive technology to analyze terahertz waves, a type of electromagnetic wave, to research atoms of gas and other things.

It aims to confirm through the research if there are water resources, including saltwater rivers, and if there is or was some form of life on the planet.

Equipment to measure terahertz waves can be reduced in size and weight. The microsized probe to be developed will be about 140 kilograms, including fuel, which is one-tenth the weight of a conventional large probe. In addition, its production cost can be reduced from tens of billions of yen to ¥1 billion or ¥2 billion.

The space agencies of some countries — such as the United States, European nations, Russia, China and the United Arab Emirates — plan to launch rockets that carry large-sized Mars probes in the early 2020s.

According to the team’s plan, their microsized probe will be carried in a vacant space in any of the rockets.

After going into orbit around Mars, microsized probes will fly with their own fuel separately from large-sized ones while adjusting their orbits, and enter Mars’ atmosphere.

The Internal Affairs and Communications Ministry aims to include their Mars mission in the government’s plan for the aerospace industry being decided in April, and to add related costs to the fiscal 2018 budget.

The National Aeronautics and Space Administration in the United States is the front-runner regarding Mars missions, and has landed an unmanned probe on Mars. The space agencies of Europe and India have also had their probes reach orbit around the planet.

Japan launched the Mars probe Nozomi in 1998, but it failed to go into orbit due to a fuel valve malfunction and other reasons.