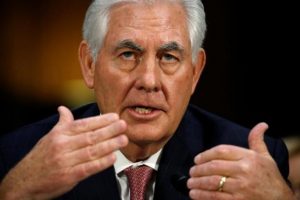 NHK, Fuji TV, and TV Asahi reported at noon that Secretary of State-designate Tillerson said at a confirmation hearing on Wednesday that the Senkaku Islands in Okinawa fall under the scope of the U.S.-Japan Security Treaty. NHK said when asked whether the U.S. will use its military force to prevent China from attempting to take the islets by force, Tillerson responded: “We have long-standing ally commitments with Japan … and I think we would respond in accordance with those accords…. We’ve made a commitment to Japan in terms of a guarantee of their defense.” The network said Tillerson’s remarks mean he will uphold the position taken by the Obama administration that the Senkakus fall under the scope of the U.S.-Japan Security Treaty. In addition, the network said while stressing the importance of U.S. economic relations with China, Tillerson denounced China by saying that creating artificial islands in the South China Sea and setting up an air defense identification zone (ADIZ) over the East China Sea, including the Senkaku Islands, are illegal. He also reportedly expressed the view that the U.S. will take a tougher stance against China by saying: “We’re going to have to send China a clear signal that, first, the island-building stops and, second, your access to those islands also is not going to be allowed.”