Every spring, the names of numerous Chinese students who passed the entrance exams of the University of Tokyo (Todai) and other top Japanese colleges are posted on the walls of a college prep school in Shinjuku. The school is managed by Akira Toyohara, a China-born naturalized Japanese citizen, who studied extremely hard to get admitted to Todai after coming to Japan in 2000 from Fujian Province at the age of 17. He then began tutoring his Chinese acquaintances so that more of them could follow in his footsteps. Since his teaching methods were popular and turned out to be effective, he decided to start a business. At present, some 1,600 Chinese take classes offered in Chinese and specifically tailored toward the entrance exams of the leading universities at his six schools in Tokyo, Osaka, and Kyoto, with each paying about $6,500 in tuition per year. There are more than ten such prep schools for Chinese students in Tokyo’s Shinjuku Ward alone, attended by over 5,000 students.

China’s presence is surging in Japan not only in tourism and other economic areas but also in education, according to the local media (Nikkei – 2016/9/20; Tokyo Shimbun – 2016/11/6; and Shukan Asahi – 2016/12/9). About 94,000 Chinese reportedly studied at Japanese colleges in FY2015, accounting for almost 45% of the foreign student body. In particular, the number of Chinese students has soared at prestigious institutions, such as Todai, Waseda University, and Kyoto University, in the past several years. For instance, 2,550 Chinese studied at Waseda as of May 2016, up 40% from five years ago. The corresponding figure for Todai was 1,245, also up about 40%. These two schools are particularly well-known in China for their high academic standards. The operator of one Chinese prep school in Tokyo explains that Todai and Waseda are the college equivalent of Louis Vuitton bags for Chinese, who adore brand-name products. As Chinese tend to place priority on status, some of them are apparently eager to leave the country to study at “fashionable academies” abroad. 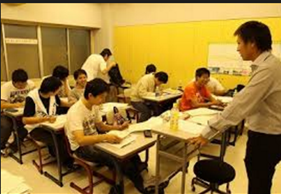 Why are they drawn to Japanese schools? Young Chinese today, especially those born in the 1990s, reportedly feel a strong affinity for Japanese culture on account of their exposure to Japanese manga, music, and TV dramas since early childhood. One Chinese woman at Todai Law School said on TBS that she chose Todai over Stanford because she liked a Japanese pop singer. The cost is another factor, as studying in Japan is less expensive than in the U.S. and Europe. A diploma from a top Japanese school can also be advantageous when looking for work in China after graduation because expertise in Japanese language, culture, and business is viewed as an asset given the large number of Chinese students studying in Western countries.

Freelance journalist Megumi Nakajima, who wrote a book entitled “Chinese Elites Bound for Japan,” points out that many Chinese students come to Japan after failing to pass their homeland’s extremely competitive nationwide college entrance exams. Applicants who are unable to enter such elite institutions as Beijing University and Tsinghua University choose to enter the best Japanese schools in order to relieve themselves of the stigma of being “losers” at home. Because most students at Beijing or Tsinghua do their graduate work either in the U.S. or Europe, Chinese students who select Japanese universities are viewed as “second-rate students who failed in the survival of the fittest” says the writer. In fact, one Chinese student at Todai acknowledged that some of his Chinese colleagues opted for Todai over Harvard or Princeton because “the peer pressure and competition” among Chinese students are less intense in Japan than in the U.S.

Since top Japanese college representatives are desperate to recruit more foreign students in the face of the dwindling youth population at home, they tend to reach out to Chinese students. Both Todai and Waseda set up recruitment offices in Beijing in the early 2000s to attract local high school students. However, some school officials are skeptical about whether the growing presence of Chinese students can be called “globalization.” Instructors at Hosei University, which was selected a few years ago by the Education Ministry as one of about 40 “super global universities,” are reportedly running into problems due to the sharp increase in Chinese students, some of whom have difficulty understanding Japanese-language texts. “The more Chinese students the school admits, the lower its academic quality may become,” says one Hosei lecturer.