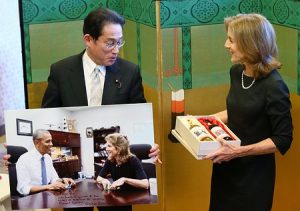 Jiji Press reported that Ambassador Kennedy and Foreign Minister Kishida held a meeting at the MOFA Iikura Guest House on Monday. Kishida expressed his appreciation to the Ambassador by saying that her actions and personality have helped realized such great achievements as President Obama’s visit to Hiroshima and Prime Minister Abe’s visit to Pearl Harbor. Meanwhile, TBS reported on press remarks made on Monday by Chief Cabinet Secretary Suga, during which he expressed his heartfelt appreciation for Ambassador Kennedy’s contributions to strengthening the U.S.-Japan alliance.