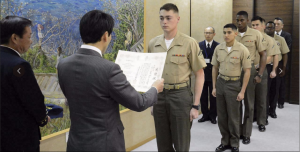 On Jan. 16, Yokusuka City Mayor Yuto Yoshida presented letters of appreciation to nine people who rescued five family members trapped in a vehicle after it fell from a multi-story parking garage in the town of Ogawa, Yokosuka City, at the end of December last year, resulting in the death and injury of the family members. “It was a sad accident, but I would like to acknowledge our appreciation for their dedicated efforts to rescue the family members,” said the mayor.

The recipients of the letters of appreciation were six U.S. service members, including U.S. Navy First Class Garrett Osborn (28), assigned to Navy Munitions Command, and three Japanese including Koji Koshikiya (48). It is said that this is the first time for Yokosuka city to present certificates of recognition to U.S. service members.

“The rescue unit arrived at the scene four minutes after the emergency call,” said Yokosuka Fire Department chief Teruyoshi Nakamura. “But the family members had already been pulled from wrecked vehicle, and we were able to implement a triage and decide which hospitals we should transport the victims to.” Thus Nakamura stressed that the rescue efforts by those who rushed to the scene facilitated the transport of the victims to the hospital.

Among the six U.S. service members, four were Marines visiting Japan for training. The four were off duty that day.

“I’m worried about the two children who survived the accident,” said Corporal Raheem Gillim (20), one of the Marines. “Although they must be grieving, I hope for their well-being in the future.”