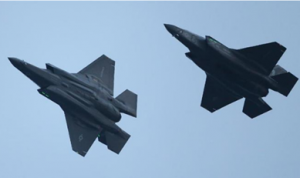 Several papers reported that two F-35Bs arrived at MCAS Iwakuni yesterday evening as part of the modernization of an existing squadron of 12 FA-18s, noting that eight additional stealth fighters are expected to be deployed there in the near future. Defense Minister Inada commented on the arrival by telling the press: “The deployment of America’s most state-of-the art and outstanding defense capabilities will enhance the deterrence of the U.S.-Japan alliance and be conducive to the stability of the Asia-Pacific region.” According to Asahi, six additional F-35s will also be deployed there in August to replace a fleet of eight AV-8 Harriers.

Tokyo Shimbun said in an accompanying article that MCAS Iwakuni will host as many as 130 aircraft when carrier-borne squadrons are relocated from NAF Atsugi as planned, speculating that since Kadena AB in Okinawa houses only about 100 aircraft, the strategic importance of Iwakuni will grow in the face of China’s rapid military buildup. One Japanese security analyst projected that MCAS Iwakuni will be the U.S. military’s core facility in responding to possible contingencies in the Senkakus, on the Korean Peninsula, and in the South China Sea.