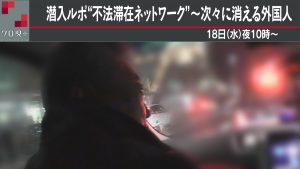 NHK’s “Close-up Gendai Plus” on Wednesday reported on a number of cases in which foreign technical interns leave their workplaces before their term of residence expires. According to the program, a record 5,800 foreign workers fled their workplaces in 2016 and are believed to be working illegally in Japan. The program discovered an underground network that supports such illegal workers, including providing jobs, creating fake residence cards, and arranging accommodations.  An expert pointed out that the current system is problematic because it only allows foreign interns to stay in Japan for three years at maximum and companies are not allowed to retain them as employees after that.