In the telephone-based public opinion survey conducted nationwide by the Asahi Shimbun on Jan. 14–15, some 63% of pollees said they approve of enacting a special law that would enable a one-time only abdication. This figure greatly exceeded the 27% who were opposed. When those approving this special law were asked if they thought that deliberations should be continued regarding abdication for all emperors from now on even if the bill is passed, some 75% said yes.

[Polling methodology: The survey was conducted on Jan. 14–15 on a computer-aided random digit dialing (RDD) basis of voters nationwide with telephone calls placed by pollsters to landline and mobile phone numbers (for landlines, some districts in Fukushima Prefecture were excluded). Valid responses were received from 950 persons (out of 1,821 households found to have one or more eligible voters) for landline numbers and from 1,027 persons (out of the 2,075 persons found to be eligible voters) for mobile numbers. The valid response rates were 52% for landline numbers and 49% for mobile numbers.] 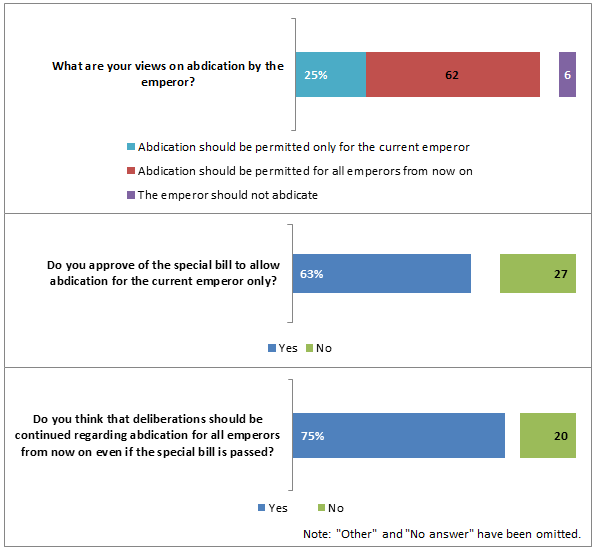