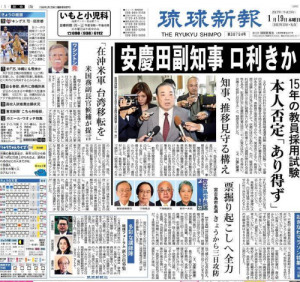 Okinawa Times and Ryukyu Shimpo gave extensive top play to reports on the recent allegation that Okinawa Vice Governor Ageda asked the prefectural board of education to hire his acquaintances as public school teachers in 2015. Okinawa Times added that the vice governor also tried to use his influence to control the selection of senior members of the education bureau of the prefectural government in 2016. The board of education reportedly rejected Ageda’s alleged requests, and the vice governor has categorically dismissed the allegations. Okinawa Times wrote that the influence-peddling scandal could affect the prefecture’s negotiations on the Okinawa base issues with the GOJ, because Ageda is Governor Onaga’s “right-hand man” and has served as a primary point of contact between the two parties.