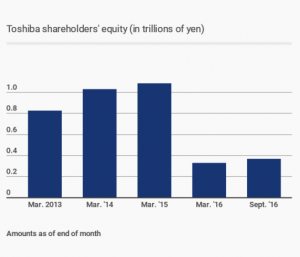 TOKYO — Shares in Toshiba are facing selling pressure on Thursday after news surfaced that the troubled electronics maker’s U.S. unit could post larger-than-expected losses. The company’s stock price traded 23% lower than on Wednesday at 270 yen.

The Nikkei reported on Thursday morning that losses at Toshiba’s U.S. nuclear unit could exceed 500 billion yen ($4.36 billion). Toshiba has said losses would be in the range of several hundreds of billion yen. The company’s shares are under selling pressure over concerns about further deterioration in its financial standing.

At 8:55 a.m. on Thursday, the company announced that it is continuing to assess the extent of the losses and there are no concrete measures at this point.

Toshiba’s November forecast showed full-year group net profit rebounding to 145 billion yen, up from a 460 billion yen loss the previous year. A strong showing by the mainstay flash memory business had made an overshoot a real possibility. But the nuclear-related write-down will likely leave the company in the red again.

The electronics giant’s capital totaled just over 360 billion yen as of the end of September. Without the losses, this could have jumped to around 500 billion yen at fiscal year-end, amid a recovery in core operations as well as a softer yen boosting the value of assets in foreign currencies. The write-down will undoubtedly deplete much of Toshiba’s capital, leaving the company with an urgent need for more funds.

The impending write-down on U.S. nuclear operations has thrown a wrench into Toshiba’s plans for rebuilding after a major accounting scandal, leaving it little choice but to rework the semiconductor and energy operations that were central to its revival strategy.

The Japanese company can get the ball rolling quickly on spinning off its chip business in order to shore up its finances. Selling a partial stake would give Toshiba cash on hand to work with. The company anticipates keen interest in light of brisk demand for flash memory for smartphones and servers.

Toshiba has received an investment proposal from Western Digital, the world’s top hard-drive maker, with which it operates a major semiconductor fabrication facility through a 50-50 joint venture. Speedy negotiations will be a must, since Toshiba hopes to book profits from a stake sale by the end of March as write-downs in the nuclear power business make a net loss all but certain this fiscal year. Investment funds have also expressed interest.

The Tokyo-based company said on Wednesday that while it is “studying the possibility” of a spinoff, nothing has been decided. One proposal under consideration would have Toshiba sell roughly 20% of the new company for a total of 200 billion to 300 billion yen ($1.76 billion to $2.64 billion).

The new entity would remain a consolidated subsidiary of Toshiba, which would continue to profit from a major moneymaker. The list of potential suitors could grow beyond Western Digital, given concerns within Toshiba that an investment by the U.S. company would tilt the balance of their equitable relationship in the memory business.

Should Western Digital buy in, a key question will be whether the deal can survive antitrust scrutiny. The two companies control nearly 40% of the global flash memory market and some 60% of the hard-drive market between them. Even Toshiba’s sale of Toshiba Medical Systems to Canon took nine months from announcement to completion after a longer-than-expected review process.

A spinoff of the nuclear power business has been proposed as well, with the goal of putting the operations under independent management while smoothing the way for integration with another company. Reducing Toshiba’s 87% stake in U.S. nuclear unit Westinghouse Electric, acquired in 2006, has been a long-standing issue.

While Toshiba plans to ramp up its search for a partner, it likely will find few takers, given the enormous losses that recently came to light.

The problem is that Westinghouse bore the risk of cost overruns inherent in nuclear plant construction. Work on two new U.S. plants fell behind schedule due to the implementation of tough new standards in the wake of the Fukushima Daiichi disaster. The sheer size of these projects, worth billions of dollars each, left them vulnerable to swelling materials and labor expenses as work dragged on.

New plant construction in Japan looks unlikely for now. Though demand exists elsewhere, mainly in emerging markets, losses stemming from construction delays will remain a risk. Toshiba will need to revise its goal of receiving new orders for nearly 40 reactors by fiscal 2030. It likely will be forced to rein in new construction while focusing on areas offering steadier revenue flows, such as overseas fuel supply, maintenance and inspection of existing facilities, and development of decommissioning and other technologies.

Beyond the top two

Strategies are also needed for improving profit margins elsewhere in the company. Businesses now playing a supporting role — such as water and sewer systems, building systems, social infrastructure such as trains, and information technology services, including artificial intelligence — must be positioned as growth drivers.

Toshiba only recently embarked on sweeping cuts. It slashed payrolls by roughly 14,000 in fiscal 2015 as part of a massive restructuring program in response to an accounting scandal. In addition to unloading Toshiba Medical Systems, the company also sold its white-goods operations to China’s Midea Group. The computer and television businesses were spun off, while image sensor production facilities were sold to Sony.

An executive reshuffle in June, including the appointment of new President Satoshi Tsunakawa, should have marked a fresh start. That Toshiba is being forced into further dismantling just over half a year later owes partly to an excessive focus on the two main pillars of its traditional portfolio. If the company does not show quickly that it is working toward making all of its operations profitable, its efforts will have little hope of success.