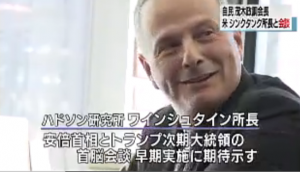 NHK reported this morning that visiting LDP policy chief Motegi met with Hudson Institute CEO Weinstein on Wednesday in Washington and agreed to further deepen the U.S.-Japan relationship under the new administration. The network said Weinstein is close to President-elect Trump. According to the network, Motegi told Weinstein: “How to deepen and develop the bilateral alliance and the economic relationship will be an important topic for us to discuss with the new Trump administration. I think this is a shared understanding between Japan and the U.S.” Weinstein reportedly responded: “The United States is hoping to deepen the alliance with Japan. The U.S.-Japan relationship remains firm and I think we can build a better relationship under the new administration.” In addition, Weinstein also expressed hope that a summit between Prime Minister Abe and Trump will be held at an early date. The network quoted Motegi as telling reporters after the meeting: “Arranging Prime Minister Abe’s visit to the U.S. and interactions between persons of influence as soon as possible and as frequently and extensively as possible is a pressing task.” 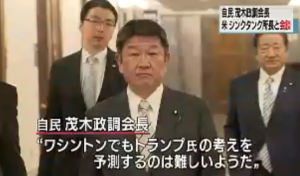 An NHK reporter said although Motegi also held informal meetings with members of the Trump transition team during his visit in order to find out about the policies of the new administration, Motegi said “it appears difficult even in Washington to predict Trump’s thinking.” The reporter said Motegi will return to Japan on Friday and brief the premier on his visit.