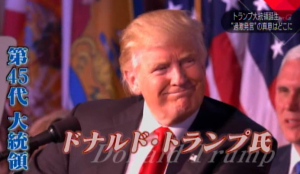 NHK’s “Close-up Gendai Plus” looked closely into the “extreme” remarks made by President-elect Trump, focusing on his statements on economic and foreign affairs. The program said although there are expectations that Trump will be able to increase jobs in the U.S., his tweets attacking specific companies are facing criticism. The program said the U.S. is divided over his plans to invest $1 trillion in infrastructure and deport illegal immigrants. Economist Tatsuhiko Yoshizaki said Trump appears to be trying to protect the “old economy” made up of manufacturers and go up against the “new economy” made up of technology companies and Silicon Valley. On foreign affairs, the program said Trump demonstrated that he is eager to mend ties with Russia by nominating Rex Tillerson, who is close to President Putin, as secretary of state. The program also reported on Trump’s hardline policy toward China. Kumi Yokoe, a senior visiting fellow at the Heritage Foundation, said that since Trump also advocates “America-first” policies in foreign affairs, he will need to stand up to China, which is stealing jobs from the U.S., adding, however, that Trump has no intention to actually clash with China. Lastly, Yoshizaki said Japan needs to increase its “options” for dealing with the new Trump administration, such as making further efforts to defend itself and holding dialogue with Russia.