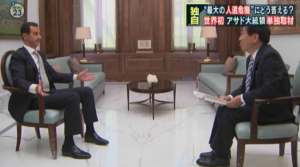 TBS’s “News 23” reported on its 30-minute exclusive interview with Syrian President Assad conducted in Syria, saying that it was the president’s first media interview since the ceasefire agreement was reached. When interviewer Hiroshi Hoshi asked whether “human tragedy” was necessary to liberate Aleppo, President Assad said: “Those that are criticizing Russia or Syria about bombings and war crimes are nations that are supporting terrorists, such as America, the UK, France, Turkey, Qatar, and Saudi Arabia. They support terrorists through media and politics. They are sending them weapons, money, and providing logistical support. They have no right to raise their voices for the Syrian citizens. They are the reason why innocent Syrian citizens have been killed over the last six years…. Second, in terms of the constitution, law, and ethics, our role as a government is to free Syrian citizens from terrorists. Terrorists are taking over parts of our nation, killing citizens, destroying everything, and forcing on them the hateful concept of Wahhab. Do you think the government will be allowed to stand by and watch? Of course, any war comes with casualties. All wars are bad. There is bloodshed and killing, and there is no such thing as a good war. However, if you have to fight against terrorists, unfortunately, there will be casualties. We did our utmost to minimize the number of casualties. Those who are raising their voices for the Syrians, do they have any evidence that Syria or Russia killed ordinary citizens? Is it ethically possible for the government to kill its own people? If we were killing our own people, do you think that, as the government, the military, or the president, we would be able to endure the past six years? This is not logical. It is not realistic. We are here because we have public support….We really want to end this war. This is the only way to save the Syrians.”

On President-elect Trump, President Assad expressed expectations for him by saying that Trump’s top priority is to fight ISIS, and expressed hope that he will truly translate his words into action. He also expressed hope that Trump will build a “true” and “realistic” coalition, which includes Syria, to fight against terrorists. On Japan, the Syrian president criticized the Abe administration for calling on the president to step down and participating in the international economic sanctions against Syria. He called on Japan to return to being a “fair” nation that had been supporting the development of Syria and other nations in the Middle East for many years in the past.