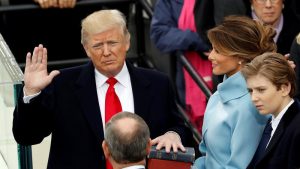 All national dailies over the weekend gave extensive top and inside-page play with color photos to the inauguration of President Trump on Friday, saying that he pledged in his inaugural address to put America first in his foreign and economic policies. All Sunday papers also highlighted President Trump’s announcement on his first day in office to withdraw from the TPP and renegotiate NAFTA, and his signing of an executive order aimed at rolling back Obamacare. Sunday’s top headlines were: “Trump rolls out ‘America First’ policies on first day in office” (Asahi), “Trump shifts to ‘America First’” (Nikkei), and “Trump prioritizes U.S. interests over international cooperation” (Mainichi), “Trump announces U.S. withdrawal from TPP” (Sankei and Yomiuri). Mainichi wrote that given that it has now become clear that the U.S. has shifted to national particularism, the world has entered an “era of unprecedented instability.” Most Sunday papers carried the full transcript of President Trump’s inaugural address both in English and Japanese. Mainichi wrote on Sunday that unlike previous U.S. presidents who spoke of noble principles during their inaugural addresses, President Trump chose to eschew such rhetoric and express his intention to focus solely on American interests. The paper wrote that his indicating that the U.S. will no longer seek “the greatest happiness of the greatest number” will be a major turning point for the world.