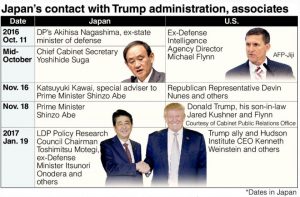 The ruling parties plan to establish communication channels between Diet members and the Trump administration and tenaciously explain Japan’s positions. Early effectuation of the Trans-Pacific Partnership free trade pact is now impossible, as Trump has declared the United States will withdraw from it, and some among opposition parties are calling for Japan’s government to change its policy of aiming for early effectuation.

“The world economy, including that of the United States, will be put in a miserable situation if all countries concentrate only on their own [economies]. A smart Trump will understand that. We’ll carefully observe the specific content and degree of ‘America first,’” Masahiko Komura, vice president of the Liberal Democratic Party, said to reporters, revealing his intention to closely watch Trump’s actions while also expressing concern about Trump stance.

Komura maintained his position that he would urge the U.S. side to change its plan to withdraw from the TPP, saying, “The negotiations will start from our explaining that the TPP would bring good results for the U.S. economy as well.”

Hiroshi Moriyama, former agriculture minister, said: “The purpose of the TPP is not only trade, but also establishing a new 21st century-style framework together with nations that share basic values. As an ally, we will tenaciously try to persuade [the United States].”

The LDP is hurrying to establish communication channels between Diet members and the new administration. Among these efforts, Toshimitsu Motegi, chairman of the LDP’s Policy Research Council, visited the United States from Tuesday to Friday and met with people close to Trump.

Trump has said he would propose that Japan shoulder more of the costs of stationing U.S. forces in Japan, so Motegi met with Republican senators and explained that the Japanese government shoulders a higher percentage of costs than other countries. The senators were reportedly surprised, as they didn’t know that fact.

A person connected to the LDP had high hopes, saying, “If we carefully explain, the U.S. side will understand.”

Komeito leader Natsuo Yamaguchi said, “We expect that a bilateral meeting will be held at an early stage in order to deepen the relationship of trust with the new [U.S.] administration.”

Democratic Party leader Renho said at a party meeting, “I’m afraid [the United States] may be moving in the direction of protectionism and isolationism to a large extent. I’m concerned about its impact on politics and the economy in the world.”

The DP opposes the TPP. Renho said, “I would like to strictly question the Abe administration, which proceeded with parliamentary approval procedures.”