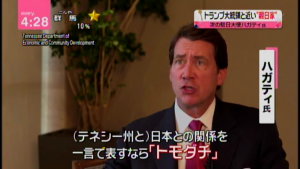 NTV’s “News Every” ran a report yesterday on William Hagerty, who is rumored to be Trump’s pick for the next U.S. ambassador to Japan. The program speculated on whether Hagerty would be as reliable as his two predecessors, Ambassador Roos and Ambassador Kennedy, who capitalized on their close bonds with President Obama to mobilize the U.S. military for Operation Tomodachi after the 3/11 triple disaster and realize his landmark visit to Hiroshima. The program claimed that as a successful U.S. diplomat to Japan, Hagerty would need to have strong administrative skills, deep understanding of Japan, and direct communication channels with the White House. NTV senior commentator Oguri argued that if nominated, Hagerty would need to play a key role in shaping bilateral relations under the Trump administration because the President will probably be critical of Japan on trade and defense.

The show claimed that Hagerty appears to be rather friendly toward Japan, airing footage showing him saying several years ago when he was Tennessee’s commissioner of economic development: “The relationship that we have with our friends in Japan… it’s Tomodachi…. [There] could not be a country that has a more significant impact on Tennessee than Japan.” According to the report, Hagerty visited Japan multiple times and successfully persuaded 79 Japanese firms to set up operations in Tennessee when he was responsible for the state’s economic development. Former Boston Consulting Japan President Hori, who was Hagerty’s supervisor when he was working in Tokyo as a business consultant in the early 1990s, said that having someone like him, who knows and loves Japan, as U.S. ambassador would be advantageous since he could serve as a “cushion” between Japan and the “tough” U.S. leader. Hori claimed that Hagerty “volunteered” for the post of U.S. ambassador to Japan.

An American man who reportedly used to work for Hagerty praised him by saying: “He has a very open-minded personality. He understands that to be successful in negotiations you must, at the end of the day, end the deal with everyone feeling really good.” According to Oguri, an unnamed senior MOFA official expressed a cautious view on whether Hagerty would be able to deal with such thorny issues as Japan’s host nation support for the U.S. military and policy coordination vis-à-vis China by saying: “His ties with Japan have centered on business. He has no connections with Japanese bureaucrats and politicians. We can’t tell if he will prove to be successful.”