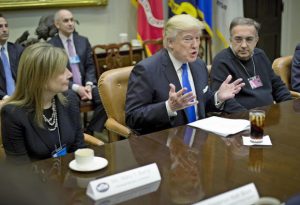 All papers reported on President Trump’s criticism of auto trade with Japan as “not fair” on Monday, saying that there is growing concern in Japan that “trade friction” between Washington and Tokyo could reemerge. Asahi wrote that Chief Cabinet Secretary Suga said during a TV interview on Tuesday that it is necessary for Japan to explain to the Trump administration the reality of U.S.-Japan auto trade during a summit meeting and ministerial talks because President Trump’s criticism of the Japanese auto market is apparently based on misunderstandings. Mainichi wrote that the Trump administration may call for Tokyo to hold bilateral trade talks in order to urge Japan to open its farm and auto markets more than under the TPP. Yomiuri wrote that the TPP signatories are closely watching China’s moves in response to President Trump’s order to withdraw from the TPP. Nikkei wrote that with possible bilateral trade talks with Washington in mind, the GOJ will reorganize the existing TPP taskforce and establish a new cross-agency unit in charge of trade strategy. The paper speculated that pressure from U.S. auto manufacturers is behind the President’s criticism of Japan.