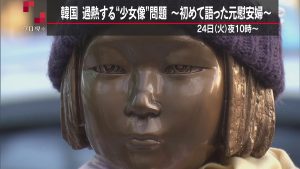 NHK’s “Close-up Gendai Plus” reported on the repercussions of the “comfort woman” statue  placed in front of the Japanese Consulate General in Busan in December 2016 by a group of student activists. Although one year has passed since Japan and South Korea reached an agreement on the comfort women issue, in which Japan offered a sincere apology and agreed to pay 1 billion yen in exchange for the ROK government’s making efforts for the removal of a comfort woman statue placed in front of the Japanese Embassy in Seoul in 2011, the issue is escalating in South Korea. The program said public opinion in South Korea has changed over the last year, saying that while more than 43% expressed support for the agreement a year ago, a survey conducted in December 2016 showed that 59% think the government should nullify the agreement. The program interviewed the family of a former comfort woman, who said it is difficult to openly talk about receiving compensation from Japan. The family of another former comfort woman said the issue should be brought to an end since Japan has already paid compensation, and the statue should be removed. A former comfort woman expressed disappointment that public opinion is focused on nullifying the 2015 agreement instead of the suffering of the comfort women. The program said people began expressing opposition to all of South Korean President Park’s policies following her political scandal, adding that South Korean opposition party members began to express support for the new comfort woman statue with an eye on the upcoming presidential election.

Meanwhile, some South Korean media are calling on the public to calm down, quoting the chief editor of an economic paper as saying: “Amid the political confusion ahead of the election campaign, we are seeing many extreme claims and such claims are being reported as is. If we respond without fully understanding this point, it could cause a more serious problem.” NHK’s Seoul Bureau chief Ikehata also said that South Korean media are beginning to argue that calling for the nullification of the 2015 agreement while ignoring the former comfort women is “irresponsible.” He said, however, that both ruling and opposition party members are focused on obtaining public support rather than mending ties with Japan ahead of the election, and every party and candidate is moving toward populism. He said that in order to change this trend, South Korean politicians should refrain from using this diplomatic issue in their election campaigns.