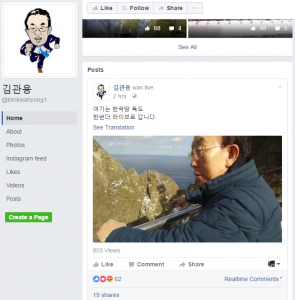 NHK reported at noon that the governor of South Korea’s North Gyeongsang Province, which claims jurisdictional authority over Takeshima (also known as Liancourt Rocks and Dokdo), landed on the islands this morning. The governor reportedly posted a video of himself greeting the security personnel on the islands on his Facebook page. The network said MOFA lodged a protest by saying that the visit is “totally unacceptable” in light of Japan’s position on the jurisdictional authority over Takeshima, and that it is extremely regrettable that the governor landed on the islands. The network said the government of the province explained that the purpose of the governor’s visit was to “directly confirm the state of alert and encourage the security personnel” since “the Japanese government has been repeatedly making false statements about the islands.”