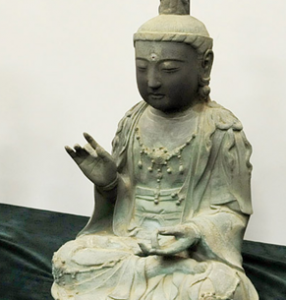 All papers took up a ruling made yesterday by a South Korean district court approving a request by a local temple to take possession of an ancient Buddhist statue that was stolen by a group of Korean thieves from a Japanese temple on Tsushima Island, Nagasaki, in 2012. Although the South Korean government filed an appeal against the court decision on the same day, the statue will probably be handed over to the temple anyway from a national museum that is housing it temporarily on behalf of the ROK government since the verdict also approved the transfer to the temple on a provisional basis.

Speculating that the possession of the statue by the temple will make transfer to the Japanese side almost impossible, Yomiuri wrote that this issue, in addition to the Busan comfort women statue standoff, will stand in the way of improving bilateral relations between Tokyo and Seoul. Sankei claimed that Japanese sentiment toward South Korea is bound to deteriorate since the South Korean judiciary effectively “condoned” the theft.

In a related piece, Asahi said ROK Foreign Minister Yun visited on Thursday a former comfort woman living in Seoul suburb, speculating that this was a diplomatic gesture intended to rectify the strained ties with Japan.