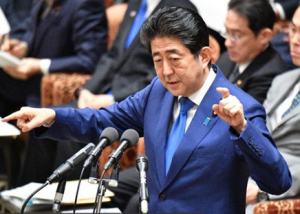 All Thursday evening papers took up remarks made at the parliament earlier in the day by Prime Minister Abe, in which he commented on the U.S. withdrawal from the TPP by saying: “We would like to hold discussions to identify the best type of economic coordination between the U.S. and Japan…. A bilateral EPA or FTA is not necessarily inconceivable. Even under such a situation, Japan will need to defend what needs to be defended. We would like to negotiate firmly in the belief that agriculture forms the foundation of the nation.” Since the premier also acknowledged the difficulty of convincing the Trump administration to participate in the TPP in the near future, the papers interpreted Abe’s statements as suggesting that Tokyo might heed possible calls from Washington to enter talks on a bilateral free trade agreement.

This morning’s Asahi said the Abe administration is bracing for President Trump to demand Japan’s consent for starting negotiations on a bilateral FTA when he meets with the premier next month in the belief that U.S. requests for trade liberalization in the auto and agricultural sectors would be much tougher than under the TPP talks. An unnamed senior Cabinet Office official expressed concern by saying: “The Trump administration may ask Japan to ‘exercise restraint’ in exporting automobiles” to the U.S. market. Tokyo Shimbun said Abe has become flexible about bilateral trade talks with Washington in view of President Trump’s steadfast opposition to the TPP. An unnamed GOJ official in charge of the TPP said: “Japan would be badly defeated in a one-on-one fight. America is a bully.”

While projecting that Abe will probably decide whether to enter bilateral trade talks with the U.S. after his purported summit with the President in February, Mainichi projected that Japan would be pressured by the U.S. to make concessions in bilateral negotiations. Nikkei speculated that Abe has become receptive to the idea of bilateral negotiations in order to avoid a “head-on clash” over trade between the two leaders in their first summit. The paper added that some GOJ officials are prepared to hold full-scale negotiations with the Trump administration on auto trade based on the judgment that Washington will not demand a bilateral FTA if a deal is made on the auto front.