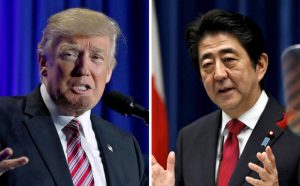 All Sunday papers front-paged reports on a telephone conversation between President Trump and Prime Minister Abe late Saturday evening (Japan Time), saying that the two leaders agreed to hold bilateral talks on Feb. 10 in Washington and confirmed the importance of the U.S.-Japan alliance. Abe told reporters afterward that he confirmed with the President the importance of the bilateral alliance in addressing economic and security challenges and that he hopes to hold candid and productive discussions on economic and security issues during the upcoming meeting. According to a GOJ briefing, President Trump told Abe that the United States considers Japan to be an important partner and that the alliance between the two countries is very important. The President reportedly recommended that Abe discuss security issues with Defense Secretary Mattis when he visits Japan later this week. Deputy Prime Minister and Finance Minister Aso and Foreign Minister Kishida will probably accompany Abe on his trip to Washington.

The papers wrote that Abe explained to the President Japanese automakers’ contributions to the U.S. economy, but the two leaders did not discuss specific issues related to the TPP or NAFTA. The issue of Japan’s spending for the stationing of U.S. forces was not discussed during the phone conversation.

Asahi wrote that President Trump may call on Japan to hold bilateral trade negotiations and make specific requests, such as restricting auto exports or removing what the U.S. refers to as “non-tariff barriers” in the Japanese auto market. Mainichi wrote that auto trade will likely become the Trump administration’s major target in its trade talks with Tokyo. The paper also wrote that the GOJ is concerned that possible friction between Tokyo and Washington over trade could have a serious impact on overall relations between the two nations. The paper added that there is a view within the GOJ that China or North Korea may take provocative actions to test the strength of the U.S.-Japan alliance if differences arise between Washington and Tokyo. Nikkei wrote that although Abe is hoping to reconfirm the importance of the U.S.-Japan alliance during his meeting with President Trump on Feb. 10, Japan may run into difficulties responding to U.S. requests related to trade or spending on U.S. troops in Japan.

Monday papers ran follow-up reports on the telephone conversation between President Trump and Prime Minister Abe. Asahi wrote that the two leaders discussed a wide range of economic and security issues during their 40-minute conversation and the GOJ interpreted the President’s reference to Secretary of Defense Mattis’s upcoming visit to Tokyo as a demonstration of the new administration’s policy of attaching importance to the U.S.-Japan alliance. The paper added, however, that it will be necessary for the Abe administration to make sufficient preparations for the premier’s meeting with President Trump on Feb. 10 especially on trade issues because the President made no response to Abe’s explanation on Japanese automakers’ contributions to the U.S. economy. Yomiuri wrote that the Abe administration is alarmed that the Trump administration may make difficult requests of Japan in auto trade and other sectors in the future. According to the paper, Keidanren has decided to set up a working group in February or later to develop strategies for business with the U.S. Nikkei wrote that it learned from a GOJ source that President Trump called for Japanese automakers to cooperate further in creating jobs in the U.S. during their telephone conversation. The paper wrote that Abe plans to reemphasize Japanese firms’ employment of American workers and investments in the U.S. during their meeting on Feb. 10.