Social media users in Japan are apparently keenly interested in President Trump’s executive order on immigration, as several thousand Japanese-language tweets have been posted in response to his signing of an executive order on Friday banning the entry of refugees and other foreign nationals from certain Muslim-majority countries. Many of them voiced dismay at the confusion and strong reactions that reverberated across the United States and the world.

Several tweets have been shared widely, including this one (retweeted 1,120 times) that appeared to be supporting the President by saying: “Mr. Trump takes issue with ‘illegal immigrants.’ He has never said he would ‘restrict all immigrants.’ Nevertheless, many media outlets around the world, including those in Japan, are trying to give their audience the false impression that he is a ‘racist.’”

On the other hand, more than 4,000 Twitter users have retweeted a Japanese message on a report by a San Francisco TV station that California is studying ways to suspend financial transfers to Washington after the Trump administration threatened to withhold federal money from sanctuary cities. 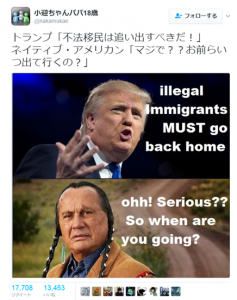 By far the most widely shared tweet (more than 18,000 times) is one showing a native American responding to President Trump’s statement that “illegal immigrants MUST go back home” by saying, “ohh! Serious?? So when are you going?”

Meanwhile, a tweet by former Osaka Mayor Hashimoto praising how “separation of powers works in the U.S.,” as evidenced by a federal judge in New York blocking part of President Trump’s executive order on immigration, has been “liked” by over 1,000 people.