53% of Japanese anticipate worsening of relations with U.S., Nikkei poll

According to the Nikkei Inc./TV Tokyo public opinion poll conducted on Jan. 27–29, some 53% of respondents predict that Japan-U.S. relations will worsen during Donald Trump’s presidency. Meanwhile, 31% said that relations will remain unchanged, and 6% expected bilateral ties will improve.

In the November 2016 poll taken not long after Trump won election, some 46% of respondents said relations would remain unchanged, 34% said they thought ties would worsen, and 6% said bilateral ties would improve. Anxiety has spread in response to the increase in interventions related to Japanese companies with American operations since President Trump took office.

[Trump has signed a presidential memorandum pulling the U.S. out of the Trans-Pacific Partnership trade pact. In the new poll, 42% of respondents said Japan should pursue a bilateral free trade agreement with the U.S.]*

[Candidate Trump had suggested re-examining how much Japan chips in for stationing American troops in-country. The survey found 57% of respondents favoring the status quo, with 30% believing that Japan should pay less. Only 5% of respondents said it should pay more.]*

Prime Minister Shinzo Abe’s cabinet registered an approval rating of 66%, virtually unchanged from 64% in the previous poll taken in December.

The survey was conducted on Jan. 27–29 by Nikkei Research Inc. via random-digit dialing (including mobile phones). It drew 975 responses from men and women aged 18 and older nationwide, for a response rate of 45.4%. 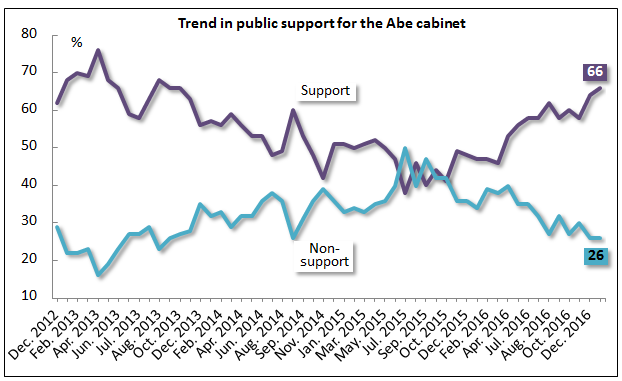