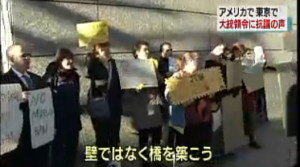 NTV reported at noon that about 30 American citizens and others living in Japan gathered near the U.S. Embassy in Tokyo this morning to protest President Trump’s executive order on immigration. One of the protestors was quoted as saying in an interview: “I’m here because these policies that Trump is making are against the Constitution and against what America stands for. People should not remain silent, people need to stand up.” Another protestor said in Japanese: “We don’t need a wall. America and other nations should build a bridge.” NHK, TBS, Fuji TV, Kyodo News, and Asahi carried similar stories.