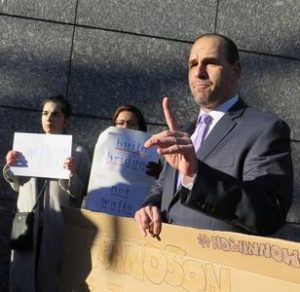 Around 40 people protested near the U.S. Embassy in Tokyo on Tuesday against President Donald Trump’s executive order banning entry to the United States of people from seven Muslim-majority countries and refugees around the world.

The protesters, mostly Americans living in Japan, came together in solidarity with people affected by the order signed Friday, chanting such slogans as “Build bridges not walls,” and “No ban, no wall, America is for all.”

“We feel very passionately about this issue…because our grandparents were immigrants and survived the holocaust…and the United States took us in and that is why we are here,” said Jess Glickstein, a lawyer in Tokyo who organized the protest.

In a bid to stop Trump’s order barring refugees and people from Syria, Yemen, Sudan, Somalia, Iraq, Iran and Libya, some U.S. residents in Tokyo are getting in contact with their legislators back home, according to Sarajean Rossitto, a 52-year-old protester.

Jewish rabbi David Kunin also took part in the protest. “I say no to any ban to Muslims coming to the United States, say no to forgetting the plight of refugees…the Jewish community stands with people of all places who are trying to make a world at peace.”

Calling the United States a nation of immigrants, Linda Crawford, a former English teacher, said what Trump is doing is against what the Statue of Liberty represents.

“We all are immigrants, Trump is entirely a child of an immigrant and has absolutely no right to judge other people who need to come to America, who have been there contributing to the American culture,” said Crawford, 79, who came from Kyoto to protest.

Alexander Gonzalez, a 26-year-old student at Temple University in Tokyo, said that being a child of Guatemalan parents, he understands the pain of people who “are living in fear every day, wondering when they are going to get a knock on their door and being asked to leave, and wondering where their children go if they get deported.”

He implored Japanese to understand the situation in the United States and support the protestors’ cause.

The entry ban could affect people from the seven countries currently living in Japan for work or study. Japan’s two major airlines, Japan Airlines and All Nippon Airways, decided Monday not to allow people with passports of the seven nations to board U.S.-bound flights.