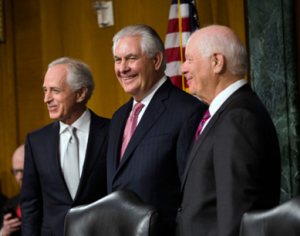 NHK reported this morning that the U.S. Senate approved the nomination of Rex Tillerson as secretary of state on Wednesday afternoon. The network said the majority of the Democratic Party members voted against the nomination while all members of the Republican Party voted in favor of it. The network said Tillerson will soon be officially sworn in, adding that attention will be focused on how the Secretary will deal with Russia and China.