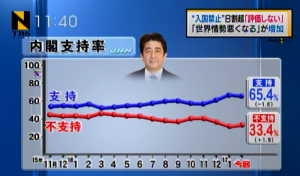 TBS reported on the results of its opinion survey conducted over the weekend, which showed that public approval for the Abe cabinet was 65.4%, down 1.6 points from last month, and nonsupport was 33.4%, up 1.9 points. On President Trump’s executive order on immigration, 11% welcomed it, while 82% did not. Regarding the global situation, 64% of respondents said it will worsen under President Trump’s policies, 25% said it will remain unchanged, and 2% said it will get better. On U.S.-Japan relations under the new Trump administration, 47% said they will remain the same, 38% said they will worsen, and 4% said they will get better. Public support for the LDP was 33.9%, down 4.8 points, while support for the Democratic Party rose 0.6 points to 7.3%.