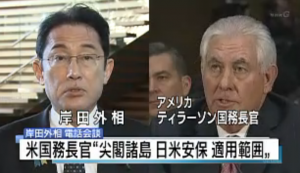 NHK reported this morning that Foreign Minister Kishida and Secretary of State Tillerson held their first teleconference this morning. Kishida later disclosed to reporters that Secretary Tillerson expressed the view that the Senkaku Islands fall under the scope of Article 5 of the U.S.-Japan Security Treaty. FM Kishida also told reporters after the meeting that he shared the view with the Secretary that strong U.S. leadership is needed for world peace and prosperity, and agreed to work together closely and continue to make efforts to further strengthen the alliance. The network said they also agreed to meet in the near future. All commercial networks carried similar stories, quoting Kishida as also saying: “We made a good start. We decided to call each other Rex and Fumio.”