To play or not to play golf, that is the question for Abe 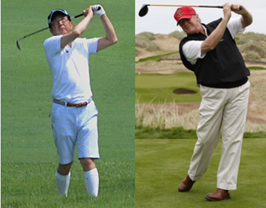 TV-Asahi’s nightly “Hodo Station” news show took up Prime Minister Abe’s upcoming trip to the U.S., highlighting press remarks on Monday by Chief Cabinet Secretary Suga, who said it is still unclear whether the premier will play golf with President Trump in Florida even though the President himself has already referred to the plan in a radio interview. The program quoted a GOJ source as saying: “Although there are risks, playing golf will be necessary [for the prime minister] to get along” with the U.S. leader. However, the program explained that it would be bad publicity for the premier to be seen having a good time with the President amid the global uproar over the executive order on immigration. Former Kyodo News managing editor Goto warned Abe against going ahead with the idea because it would give the international community the impression that Tokyo is a “faithful follower” of Washington. The journalist suspected that because it was Abe who first suggested that they play golf sometime when they met in New York right after the election, the premier may not be able to decline the invitation.