“Fake news” – Are you a victim or an offender? 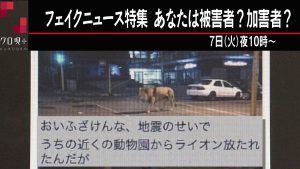 NHK’s “Close-up Gendai Plus” reported on the “fake news” spreading around the world via the Internet, saying that there are ways to make money by circulating scandalous but groundless news stories and that many people share such articles on social media without really thinking. The program also reported on efforts by Facebook and other social media platforms in the U.S. to detect fake news.