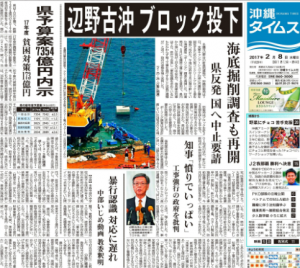 This morning’s Okinawa Times and Ryukyu Shimpo gave extensive coverage to yesterday’s operation by the Okinawa Defense Bureau to place large concrete blocks in waters near Camp Schwab, focusing on the rage expressed by Okinawa Governor Onaga, local residents, and base opponents. According to the articles, four blocks were laid on the sea bottom on Monday, and 224 additional blocks will be placed through early April in preparation for the installation of four massive underwater fences to prevent the spread of dirt. The bureau also resumed preliminary drilling operations in the construction area yesterday for the first time in almost a year. The dailies emphasized that the governor and base opponents pledged to redouble their efforts to derail what they call the “destruction of the precious marine environment” by the central government.