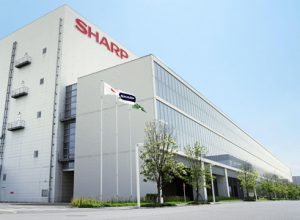 Sharp Corp. is considering a massive U.S. investment to build a liquid crystal display panel plant, a senior executive said Wednesday, in an apparent attempt to demonstrate its contribution to the U.S. economy ahead of summit talks between the Japanese and U.S. leaders.

The first major Japanese electronics firm to come under foreign ownership plans to urge other Japanese companies such as makers of LCD panel manufacturing equipment to participate in the planned investment, which is expected to total several hundred billion yen.

“We want to start construction in the first half of this year,” the senior executive said, signaling his hope that Sharp will start production by 2020.

Sharp has secured a combined new loan quota of 300 billion yen from its creditor banks — Mizuho Bank and the Bank of Tokyo-Mitsubishi UFJ.

In December, Sakai Display Products Corp., a group firm jointly owned by Sharp and Hon Hai and headquartered in Osaka Prefecture, western Japan, said it will build a large-scale LCD panel plant in China with an investment of up to around 1 trillion yen.

Sharp said last week that it moved back into the black in the October-December period for the first time in nine quarters due mainly to streamlining logistics and cutting procurement costs with Hon Hai.

The Osaka-based company also revised upward its consolidated earnings forecast for the current business year through March as its main businesses except solar panels are recovering.