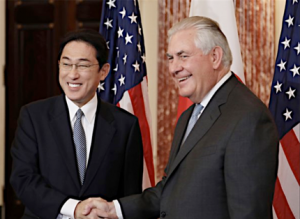 Saturday’s Asahi and Mainichi reported from Washington on visiting Foreign Minister Kishida’s meeting with Secretary of State Tillerson on Friday, during which the Japanese official underscored the importance of pursuing the TPP. In response, the Secretary said: “It is important to build close economic relations with countries in the Asia-Pacific region by developing U.S.-Japan economic relations first.” The two top diplomats agreed to enhance the trans-Pacific alliance and trilateral coordination with South Korea for ensuring regional stability in view of China’s maritime advancement and North Korea’s nuclear and missile development. They also affirmed that the Henoko plan is the “only solution” for Futenma relocation. The Secretary stated that the Senkakus fall under the scope of the U.S.-Japan Security Treaty.

Several Sunday papers reported on Vice President Pence’s meeting with Deputy Prime Minister Aso held ahead of the U.S.-Japan summit, highlighting their accord on deepening economic relations by launching a new economic dialogue.