Takaji Kunimatsu: Born in 1937. Kunimatsu was injured in an attempt on his life in 1995 when he was the chief of the National Police Agency. He served as Japanese Ambassador to Switzerland from 1999 to 2002. He is now the chairman of the Outlook Foundation. 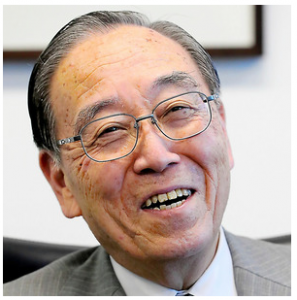 Not as cheap labor, but as real people

Let’s accept foreigners as real participants in Japanese society. This is the proposal from the former National Police chief. Why does Kunimatsu promote the inclusion of more foreigners at a time when the Japanese people are concerned that an influx of outsiders would lead to the deterioration of domestic security and the danger of terrorism? Asahi Shimbun interviewed Kunimatsu and asked him how he arrived at his way of thinking, his vision for foreigners in Japan, and his message to the senior members of the police and the government and to Japanese society as a whole.

Q: It is a bit surprising to hear a former police chief calling for acceptance of more foreigners.

A: The other day, an acquaintance, a politician, said to me, “What happened? What’s going on with you?” For some reason, people think everyone involved in police work is against immigration and foreigners. I am not saying we should unconditionally increase the number of foreigners in the country; I am saying that if we accept foreigners, we should establish a solid system and prepare a good environment for their receipt, as that would facilitate security. To me, there is no contradiction.

When I was the director of the criminal division of the national police agency, the media raised a ruckus about foreign workers coming to Japan and many of them being arrested. But at the police agency, we did not see a higher crime rate associated with foreigners. When the number of foreigners increased, the number of arrests increased. That’s just natural.

Q: So what made you think we should accept more foreigners?

A: The three years that I spent in Switzerland as the Japanese ambassador had an influence on me. I began to harbor the strong sense that Japan would face a big problem if it didn’t prepare for accepting foreigners with Swiss-style wisdom.

Q: What is the Swiss-style wisdom?

A: Foreign permanent residents and short-term workers account for a quarter of the Swiss population of 8 million. They are generous towards refugees, too. It is common to see foreign CEOs; they are not regarded as an anomaly. All three employee of the ambassador’s residence were foreign born.

I was impressed that Switzerland offers language education and occupational training to foreigners and provides opportunities to work in jobs they are capable of. On the other hand, if they commit a crime, they will face a strict punishment including deportation. If they have no intention to contribute to society, or ability to do so, their visa may not be extended. They are using both carrots and sticks.

The geographical and historical contexts are obviously different for a nation in the middle of Europe and for an island nation in Asia. But don’t you think we share conditions in common–namely, limited land area and people as a resource?

Q: Compared with Switzerland, how do you see Japan’s situation?

A: I hear calls for help from everywhere in Japan. The foundation where I serve as chairman held dialogues in six municipalities last year on the topic of accepting foreigners. The sessions involved governments, residents, NGOs, and experts. One example is a fishery cooperative that receives government-sponsored technical trainees to supplement the shortage of manpower. Even though they are well received, account for 30% of the cooperative’s workers, and people are happy with them, the trainees have to leave when the three-year training period ends.

I am aware of problems with the trainee program. But people who receive trainees feel that by the time they have learned skills, it is time for them to go home. Thinking that they have to leave eventually, the trainees don’t make a great effort to learn Japanese, and that complicates their inclusion in the fabric of society.

There is an increasing discrepancy between successful foreigners in Japan and unsuccessful ones, some of whom are called “double-limited,” meaning they are fluent in neither Japanese nor their native language.

Q: But there is no government initiative for accepting immigrants.

A: In Japan, the word “immigrant” has the negative connotation of someone who abandoned their native land. Incidents in Europe are not helping either. I think the Abe administration is willing to accept the foreign workers that Japan needs. And for that purpose, the government is purposefully avoiding the word “immigrant.” Therefore I would like to suggest receiving foreigners as real people who work and live here.

Do you think it’s okay to tell foreign workers “please go home now” after we are finished with their labor? Everyone including foreign workers seeks stability in life. If the foreign workers want stability, they should become part of our society, adhere to our rules, and learn our language. Our government should formulate the necessary systems for helping them. But we should firmly request those who don’t want to make such efforts to leave.

Q: There are people who think the participation of Japanese women and senior citizens in the economy should come first. Some also say cheap labor will hinder technological innovation.

A: The priority should be Japanese women and senior citizens. But when we think of the drastic decline in the Japanese population that looms in the future, Japan has reached the point where the participation of the domestic population alone is not enough.

Categorizing foreigners as cheap labor runs counter to the view of them as real people living in Japanese society. Accepting them in Japan and enjoying the fruits of their labor means that they should receive remuneration on par with that of the domestic population. Nurturing talented individuals regardless of nationality is what competition should be about.

Population decline is the trend in Asia. China will have a labor shortage sooner or later. When that happens, demand for workers from Indonesia and the Philippines will be so high they will not accept our offer to come to Japan.

Q: An increasing number of countries have become hesitant to receive immigrants out of concern about terrorism.

A: Of course, regular crimes and organized crimes should be considered separately. It is true we need to be vigilant against the infiltration of terrorist organizations, such as ISIS, into society. The key is information gathering and coordination with investigative institutions overseas. It is helpful, in that sense, that communication interceptions and plea bargaining have been legalized.

One concern is that despite the expanding framework for incoming foreign workers such as the government trainee program, there is no cohesive policy in Japan. The disappearance of trainees during the trainee program and cases of illegal employment increase the police workload. If we are concerned about security, then we must take serious measures to ensure that foreign workers will not turn into outsiders so that the police can concentrate on organized crimes and anti-terrorism operations.

Q: Do you think Japanese people can get along with foreigners who are increasing in number?

A: It is a misconception that the Japanese people don’t have a tradition of welcoming foreigners. We have welcomed people from overseas since the Asuka Period [538 to 710].

On the other hand, the habit of looking down on other Asian people arose in the process of modernization that started in the Meiji Era. I understand that some Japanese people are uneasy living with people whose language and habits are different from theirs. I am not saying it is easy for Japanese to accept foreigners among them. There are going to be challenges. But precisely because of that, we need to train ourselves as soon as possible. A participant in one of the dialogues said: “We don’t just expect labor from foreign workers. We want them to show us a new vision and fresh ideas that may help break through the feeling of stagnation prevalent in rural Japan.” Let’s think positive. (Abridged)