Round-table with Tokyo-based foreign correspondents on the Abe administration

While the world is reeling from the first few weeks of the Trump administration’s taking power, the second Abe administration, now in its fifth year, is aiming to gain greater global presence. How do Tokyo-based foreign correspondents view Abe’s performance thus far? In this round-table talk five correspondents from five major papers discussed their views on the incumbent administration. 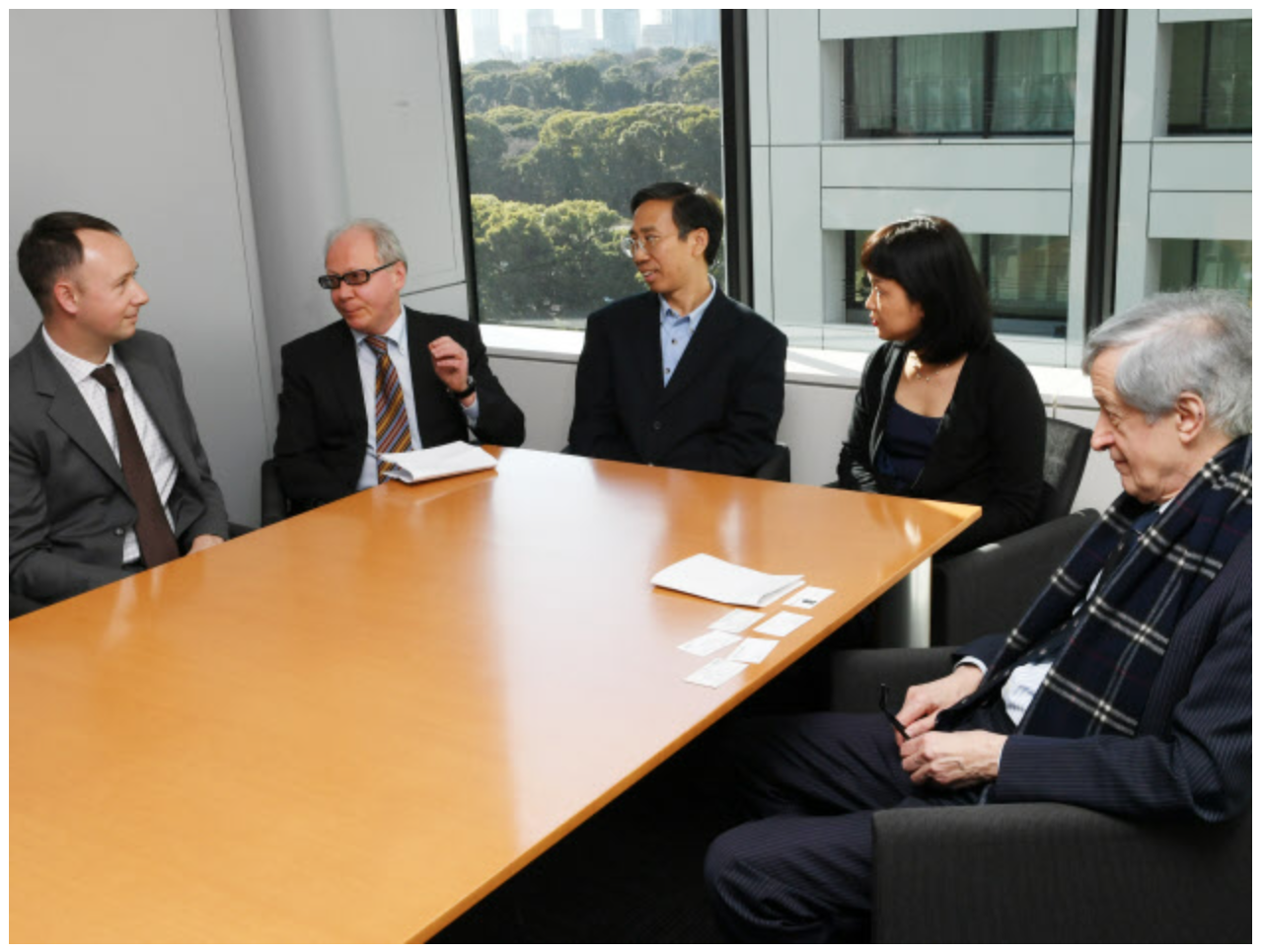 Alastair Gale (Japan Editor at The Wall Street Journal) Graduated from the University of Bristol. Based in Japan from 1993 through 2004 and 2016 to present. A 46-year-old British citizen.

Anthony Rowley (Tokyo correspondent at Singapore Business Times). Graduated from the University of Birmingham. Assumed current position after working at The Times. Based in Japan for over 20 years. From the UK, 67 years old.

Q: What are your thoughts about Prime Minister Abe’s economic policies?

Rowley: Although Abenomics has been about bold economic revitalization policies, I do not believe the three-pronged approach will end up working. Abe’s monetary easing and increased public spending showed instant results, so they set unrealistic expectations for Abenomics. On the other hand, it will take decades for structural reforms to yield any results. This caused public frustration, but the administration had no other option but to continue monetary easing and increase public spending.

Gale: I very much agree. Looking at the recent data, one could argue that there has been some growth, but it’s still a far cry from achieving structural reform. The measures taken by the Bank of Japan have reached their limit, and there are complex structural issues that must be addressed, such as the graying society with low birthrate. There is still time, if Abe were to stay in power till the Tokyo Olympic Games. He just needs to buckle down and face the difficult issues.

Soo: Big businesses are earning more profits and large cities like Tokyo and Osaka are thriving. While the wealth of the nation is concentrated in these big cities, the economies of more rural areas are subsiding. Supporting the livelihood of non-regular workers remains a challenge.

Another tax hike is sure to hurt the economy. Many have high hopes for hosting the Olympics, but it is anyone’s guess whether the Games will have any positive impact on the already mature Japanese economy. I am concerned that a tax hike will wipe out the economic benefits of the Games.

I think there is a strong attachment to antiquated systems and a reluctance to embrace the new. Take a look at Chinese youth; they have gone completely cashless. They use their smartphones to pay for everything. The Japanese mindset needs to change.

What is peculiar about Japanese politics?

Q: What do you find peculiar about Japanese politics?

Golovnin: I don’t mean any disrespect, but I’ve been wondering what purpose the upper house serves. This is especially true recently. When I listen to their arguments and perspectives, they are identical to those of the lower house, so I question their worth. Russia has a federal system, so we need the upper house to represent rural areas. That’s not the case with Japan. It all seems like a waste of time and money.

Soo: I think the Diet sessions are too long. No budget deliberations are held at the appropriation committees. Instead, they talk about unrelated topics, such as someone’s use of political funds. The National People’s Congress in China is two weeks, tops. The goals are crystal clear; they enact laws, approve budgets, and implement policies.

The opposition parties criticize the Prime Minister’s authority to dissolve the upper chamber as self-serving for partisan interests. Typically, economic and senior-friendly policies are rolled out  prior to elections, and the chamber is dissolved at an opportune moment.

Rowley: The British Prime Minster does not have the authority to dissolve parliament whenever he or she likes. There are conventional checks and balances in place to discourage anyone from having absolute power.

Kim: I think the Democratic Party and other opposition parties are too weak. When I watch a debate between the ruling and opposition parties, it’s like watching a boxing match between a flyweight and a heavyweight. The ruling party’s Q&A sessions are usually scripted. It makes me wonder if any of the discussions are spontaneous without behind-the-scenes consensus building.

A Diet member threw a tear-gas grenade during a plenary session in Korea. Korean reporters, who were watching a televised Japanese debate on national security, kept joking that the Japanese opposition party members were too tame, and that they need to show their dissatisfaction through use of force.

Q: How do you view the Abe administration?

Gale: It’s stable, whereas previous administrations turned over frequently. There is great political unrest globally, not just in the U.S. Prime Minister Abe has ambitions goals. I’m watching how he does.

Golovnin: Japanese politics revolves around Prime Minister Abe. Although he is not an ideal politician, with but a thin record of achievements, he boasts overwhelming power compared with his opposition rivals. Abe’s strength is his ability to think strategically. He is trying to reach a compromise with Russia on the disputed Northern Territories through innovative means. I think he will remain in power for quite a long time.

Soo: Japan has changed drastically since I was first posted here in the 90s. The security-related bills were forcefully approved and fiscal policies were implemented all according to Abe’s plan. The influence of the liberal politicians is diminishing, as there is less tolerance towards perspectives that do not fit with the current administration, even public sentiment out of sync with the Kantei is coming under attack.

Rowley: The Abe administration is good at making preemptive moves. That can be both good and bad. It is highly skilled in foreign diplomacy and overall political competency, but I have concerns about its constitutional reform and defense policies.

Response towards the Trump administration

Q: How do you think the world will change with the birth of the Trump Administration?

Soo: President Trump has been attacking all the countries he deems to be against U.S. interests, like China and Japan, under the slogan “America first.” However, he has been toning down the outrageous rhetoric he has been using during the Presidential campaign. I think we have to wait and see until he settles into filtered rhetoric before reaching any conclusions.

Golovnin: I was quite surprised when Defense Secretary Mattis came to Japan and dispelled almost all Japanese fears in response to Trump’s public statements–namely, fears about American troop withdrawal and increasing Japan’s financial burden for the stationing of troops.

In that sense, U.S.-Russian relations remain uncertain as Trump’s foreign diplomacy is based on bargaining. While Russian President Putin wants sanctions lifted, President Trump may drive a tough bargain with ISIS in the Middle East.

Gale: I agree that things remain uncertain. The Trump administration is sending shockwaves through traditional American political forces that believed in free trade and acceptance of immigrants.

Meanwhile, there are people like Mattis, close to Trump, who appease extreme ways of thinking. Trump would shock the world if he were to implement military measures against North Korea and economic measures against China, but so far, his “America first” policies seem to be directed internally. All we can do is pay close attention.

Rowley: Trump categorically opposes multilateralism. If he continues in his protectionist ways and pursues only bilateral trade deals and imposes stricter regulations, it will create havoc all over the world.

Kim: The leaders of Korea’s neighbors have strong personalities: Prime Minster Abe, President Putin, and Chinese President Xi Jinping. No one anticipated Trump’s victory. The stakes are now high. Trump could remain in power as long as eight years. There could be drastic changes in North Korea during his tenure. South Korea is very concerned about this situation.

Q: What do you think about Prime Minister Abe’s foreign policy?

Gale: Prime Minister Abe is diplomatic. He remains confident going toe-to-toe with the likes of Putin and Trump. His predecessors, like Yoshihiko Noda, were never as self-assured. When it comes to security policy, Japan has no alternatives to the Japan-U.S. alliance. He needs to handle foreign diplomacy with care.

Golovnin: Although Abe and Putin have met for talks 16 times, their relationship is dispassionate. To be frank, these two cannot resolve the disputed Northern Territories issue. It is possible that Abe may agree to have only two islands returned, but Putin doesn’t intend on returning a single one. The Russian people want a strong Russia; they want Putin to expand national territories, not reduce them.

Soo: I do not deny that national leaders could form strong personal friendships with each other, but in the end, all leaders will prioritize their national interest. It is a balancing act of finding win-win resolutions and earning trust while representing the national interest.

Rowley: Japan-China relations are not good. There is a schism between the two nations over the Senkaku Islands. The Trump presidency is heightening tensions in an already tense security environment in the Asia Pacific region. I am pessimistic about this

Kim: Historically, Korea and Japan have built a special relationship. Now that President Park Geun-hye’s administration is no longer functional, her replacement will be key. According to recent polls, the Democratic Party leader Moon Jae-in has the highest chance to win the presidency. If he were to be elected, it would be interesting to see how Abe will deal with his liberal agenda. North Korea and the Trump administration remain ongoing concerns.

The so-called comfort women issue is not an easy one either. It still draws great attention as a tragic atrocity committed against poor young women. These kinds of historical events are usually forgotten after a decade, but not when it comes to the comfort women.

I am curious why Prime Minister Abe does not criticize Russia. I was surprised that he remained mum on Russia’s missile deployment during last year’s Japan-Russo summit meeting.

Golovnin: That’s easy. Prime Minister Abe has two main goals in Russian diplomacy: to resolve the Northern Territory dispute and to prevent Russia and China from getting too close. That’s why he didn’t say a word about the missile deployment. He does make a big deal when Chinese boats enter the waters around the Senkaku Islands, though.