Toyota moves to avoid trade friction with US

TOKYO — Toyota Motor has endured two massive waves of U.S.-Japan trade friction. The first came in the 1980s and was the result of two oil crises from the previous decade. Smaller, more fuel-efficient Japanese cars became popular in the U.S. 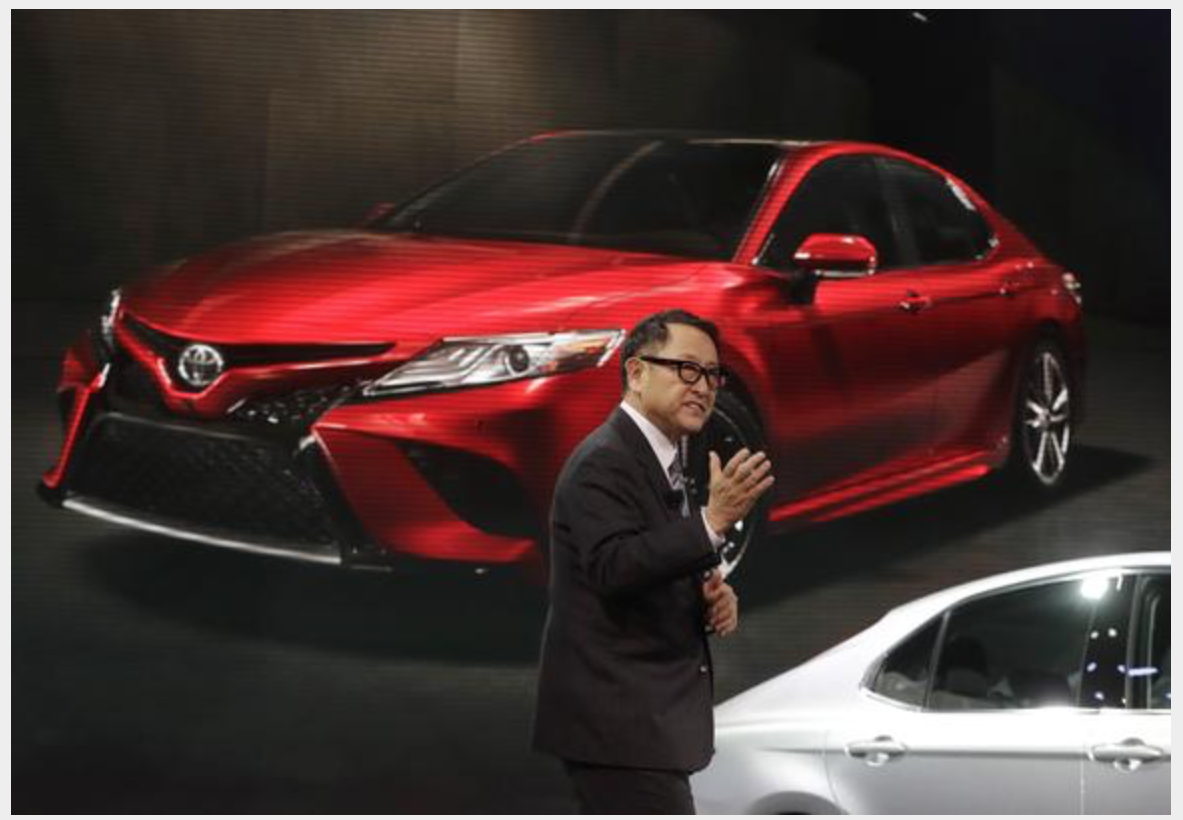 The second came in the 1990s, when U.S. automakers, then known as “The Big Three,” got mired in a downturn. Their Japanese rivals made for easy targets. This led to contentious negotiations known as the Japan-U.S. Strategic Impediment Initiative.

Each time, Toyota and other Japanese carmakers overcame the headwinds by introducing voluntary restrictions on exports to the U.S., moving more production to the U.S., even importing into Japan vehicles made in the U.S.

Yes, they succumbed to pressure and complied with U.S. demands, but the reality was that the Japanese carmakers continued to expand and profit from their U.S. operations in the years that followed.

This time, with U.S. President Donald Trump fanning the flames, Toyota is about to face a third wave. Yet it is not the “Japanese” company it was in the previous feuds. It is a highly globalized multinational with supply chains spread across the world.

Pleasing Trump could be daunting.

Toyota President Akio Toyoda sighed with relief in the city of Kosai, Shizuoka Prefecture, on Saturday after the latest Japan-U.S. summit ended amicably. Welcoming an agreement to establish a new framework of economic talks between Japan and the U.S. represented by Japanese Deputy Prime Minister Taro Aso and U.S. Vice President Mike Pence, Toyoda said, “I am thankful for the creation of good opportunities for talks on how to promote development between the two countries.”

Toyoda’s reaction is understandable given that the largest Japanese automaker has had a nerve-wracking year so far.

On Jan. 5 Trump took issue with Toyota’s plan to build a new plant in Mexico in a Twitter rant: “No way! Build plant in U.S. or pay big border tax.” Toyota officials were not quite sure how to respond. A few days later, Toyoda declared at an auto show in Detroit, Michigan, that Toyota would invest more than 1 trillion yen ($8.75 billion) in the U.S. over the next five years.

When the Trump administration set his sights on the Japan-U.S. auto trade imbalance, Toyota officials hastily explained the automaker’s U.S. operations to politicians and government officials.

But Toyota hardly expected this to settle the fracas. Japan-U.S. trade friction has “subsided over the past 10 years but remains pending for 20 years,” a Toyota executive said.

“We will have to change our domestic manufacturing system if we agree to boost production in the U.S.,” a Toyota executive said.

When Toyota was producing few cars overseas around the 1980s, it benefited from advancing into the growing U.S. market. By the end of the 1980s, though, Japan’s bubble economy burst, prompting its automakers to shift manufacturing to other counties. 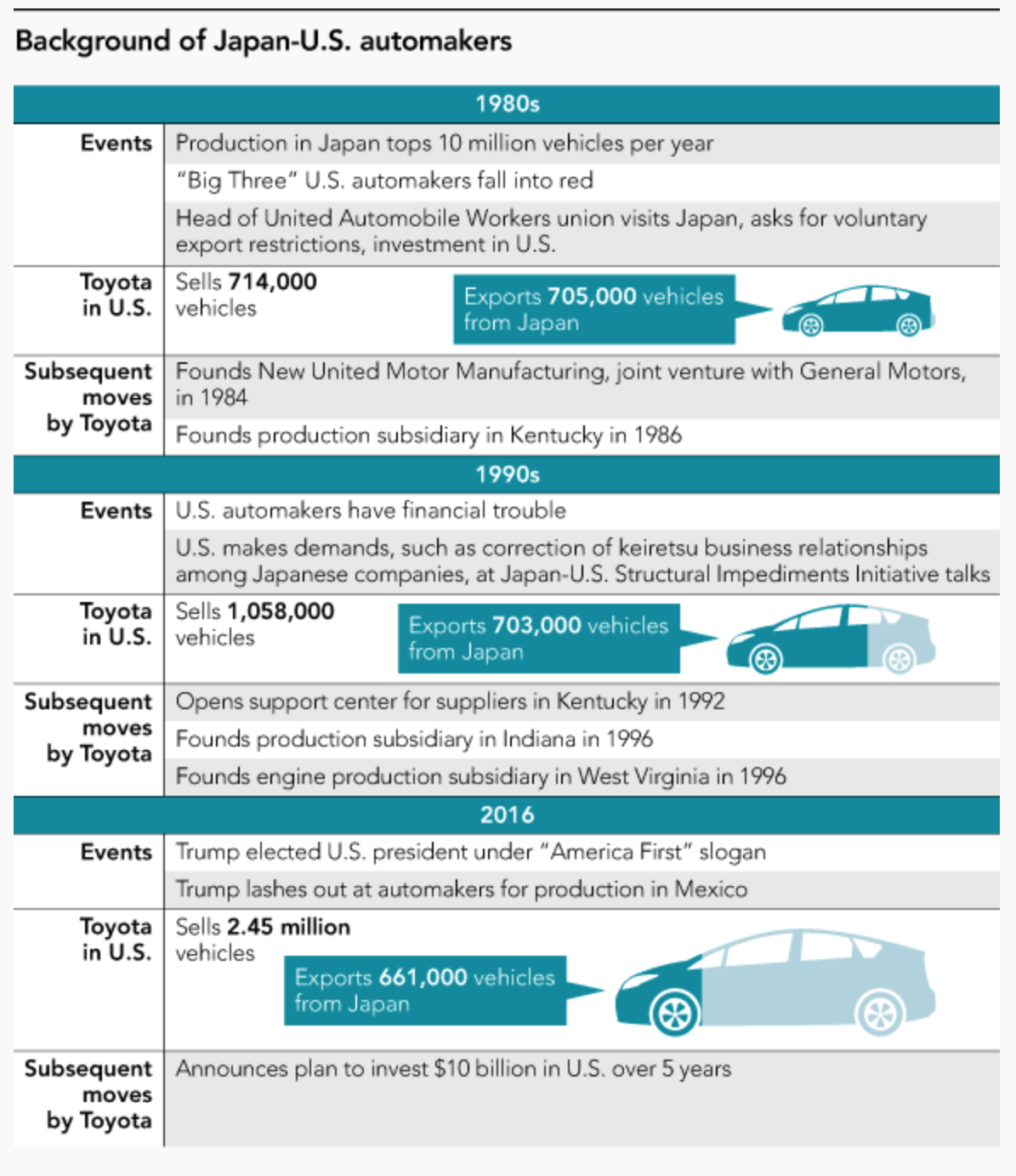 Recently, however, growth in the auto sector has slowed, especially in advanced economies. Toyota’s production increase has dropped to around 1% a year.

Cutting exports to the U.S. will cause a surplus in output at domestic plants, a situation that could upset Toyoda’s pledge to “maintain domestic production of 3 million vehicles by any means.” Thus, Toyota is facing a zero-sum game: an increase in one place is matched by a decrease in another.

The globalization of its operations is another factor that makes it difficult for Toyota to expand production in the U.S.

Toyota has sharply increased production overseas since 1995 when Japan-U.S. auto trade negotiations were settled. As a result, it now has 36 companies abroad for assembling or producing vehicles.

Also, automakers pay close attention to global developments, such as when China surpassed the U.S. as the world’s largest auto market in 2009.

If Toyota rolls over to Trump’s calls, it may face the same demands from other countries, a Toyota executive said, fearing a domino effect.

In addition to Japan-U.S. trade friction, Trump is calling for changes to the North American Free Trade Agreement. “If rules are changed, we will accumulate corporate efforts in compliance with changes,” Toyoda said. Another Toyota official added, “We are making preparations in anticipation of various developments.”

Automakers have established auto production and supply systems in North America based on NAFTA. Exports from Mexico to the U.S. will be affected if the U.S. imposes duties as proposed by Trump.

Assuming such a development, Toyota has quietly begun talks with suppliers to analyze how its business in Mexico will be affected. The company intends to create an operation system flexible enough to cope with any situation.

Toyota will also try to increase public awareness of its U.S. operations in a bid to win greater popular support.

At a hearing in the U.S. Senate on Jan. 18, Sen. Todd Young from Indiana voiced his opposition to Trump’s plan to levy a border tax on imports from Mexico, citing the need to protect local automobile companies that procure parts from the country. Because many automakers have manufacturing plants in Indiana and rely on their global supply chains, workers should be protected from losing jobs as a result of protectionist policy, Young said.

Toyota also operates in Indiana. Though aware that production there would be inefficient due to such factors as high logistics costs, Toyota decided to build a plant in the state in line with its strategy to have a presence in various parts of the U.S. in order to win broad public support. Thus, Toyota was heartened by Young’s words in the Senate.

Vice President Pence — who served as governor of Indiana and will represent the U.S. at new economic talks with Japan — in January met with Toyoda and reportedly called for Toyota to pay heed to the state and municipal officials.

While uncertainty looms over Japan-U.S. auto trade, a retired Toyota executive, who was involved in negotiations to settle rows in the past, said, “Almost all issues concerned, including dumping and transfer price taxation, have been put on the table. As yen-selling market intervention to correct a strong yen has also ceased, Mr. Trump’s claims are unfounded.”

J.W. Chai, former vice chairman of trading house Itochu who mediated a joint venture between Toyota and General Motors in the 1980s, also said the friction ended “a long time ago.”

But optimism is not warranted this time. Although the recent Japan-U.S. summit ended well, a Toyota executive said of the outlook, “I don’t know what will happen.”

The risk of unexpected flux in business environments is greater than ever against the backdrop of Britain’s decision to withdraw from the EU, Trump’s win and upcoming national elections in several European countries this year.

With populism sweeping across the globe, multinational corporations need to be as flexible as willows to overcome the winds of change.