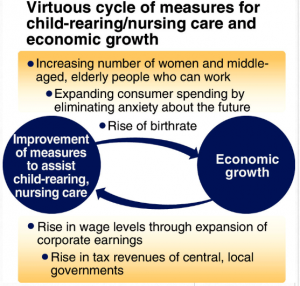 To ensure Japan’s economic growth when depopulation and a super-aging society have become the norm, improving conditions for child-rearing and nursing care is a must. Bettering these conditions will allow more women and middle-aged and elderly people to work, which will then contribute to lifting the birthrate. If social security can help alleviate anxieties for the future, that will then stimulate consumption and have the huge effect of helping Japan overcome deflation.

The Yomiuri Shimbun thinks it is time to converge the efforts of governments — both central and local — and the private sector, including companies, to address these issues. To help with these efforts, the newspaper has compiled a five-point proposal for giving people involved in child-rearing and nursing care a stronger sense of security.

Japan established a universal health insurance and pension system in the 1960s. The system has prevented wealth disparity from spreading and has stimulated consumption by alleviating anxieties associated with the prospect of old age, thereby enabling beneficiaries to pursue a more fulfilling life.

But the nation’s social security system now faces problems that are somewhat different in nature from what we have seen in the past. Child-rearing conditions for the younger generation and nursing care challenges for people in their most productive years looking after elderly relatives are not vague concerns, but a pressing reality.

In many cases, parents, mainly women, have no choice but to give up trying to balance work and child-rearing because there are not enough nursery schools to look after their infants.

More than 20,000 children are on waiting lists for entry to certified nursery schools, and the number is not expected to drop to zero anytime soon. In such circumstances, families’ hopes of having a second child grow faint and the decrease in the number of children being born continues its trend.

It is also estimated that 100,000 people a year quit their jobs to care for their relatives.

What’s more, the fruit of economic growth itself is also on the decline.

According to a Cabinet Office estimate, Japan’s potential growth rate (see below), which was at 2 percent to 4 percent in the first half of the 1990s, has dropped to 0.8 percent in recent years. Increasing the potential for growth while generously distributing the results of economic growth to the child-rearing generation and those involved in nursing care is an urgent priority.

Firstly, we need to arrange better conditions for bringing up children. Seventy percent of the children on waiting lists for nursery schools are 1 or 2 years old. The core of the problem is a shortage of facilities that can accept children in this category.

The government should take measures such as providing small pieces of state-owned land or giving firms that run nurseries in their own office buildings a tax break.

While the number of children on waiting lists remains high, kindergartens for children from 3 until they reach school age have difficulty reaching their capacity, and the imbalance is most conspicuous in the urban areas. The best solution to this problem would be to urge these kindergartens to shift to “nintei kodomo-en,” or certified facilities for children (see below) and give them ample financial support.

It is predicted that the number of elderly people needing nursing care will increase as all of the so-called “dankai” generation, or postwar baby boomers, will have turned 75 in the 2020s. It is crucial to help them to remain in physical condition that is good enough not to require intensive nursing care. The government is considering a system in which fees paid to nursing care service operators will be increased in line with the performance of each operator, based on factors to include the degree of improvement in the physical condition of care service users. The direction of the change is appropriate because it is also possible to reduce the total amount of nursing care costs under such a plan.

It is estimated that one out of five elderly people will be suffering from dementia in 2025. If an elderly person suffers dementia, the burdens on people who provide their nursing care will become drastically heavier. There have been numerous cases in which people became isolated after being unable to find someone to talk to about such problems, and eventually ended up killing themselves or their own family members. Japan must not be a society in which people disregard such tragedies.

It is necessary to establish a basic law for measures to cope with the issues of dementia and to build a comprehensive and permanent system for promoting those measures after reviewing short-term actions taken by each ministry and agency on relevant issues.

The government has included measures to improve working conditions of those who work in nursing care for the elderly and day care for children in its draft of the fiscal 2017 budget. However, the budgetary action is inadequate because the monthly salary level of workers in day care for children is ¥100,000 lower than the all-industry average. It is strongly urged that the pace of the improvement should be accelerated.

It is also important to utilize the latest information technologies. For example, the technologies can be used to monitor physical conditions and behaviors of children and elderly people seamlessly 24 hours a day, and notify care facility workers of anything abnormal. The optimal combinations of human resources and technology will be able to not only reduce burdens in workplaces but also become world-leading business models. The government should actively support such efforts by the private sector because it is also beneficial as an industrial policy.

In addition to the various measures, it is important to implement reforms on working styles. If the burden of long working hours is not alleviated, both child-raising generations and generations who provide nursing care will be exhausted, and the fruits of the government policies will be meager. Therefore, companies must take the lead by making their systems and corporate cultures better suited to the times, including systems for taking leave from work for child-rearing and nursing care.

Although it is desirable that the consumption tax be used as the pillar for securing the stable government revenue sources needed to support social welfare, the government’s current priority is pulling out of deflation.

While the government is in critical fiscal condition, a tremendous amount of money has been piling up in the private sector. Companies’ internal reserves reached ¥378 trillion while cash and deposits of households reached ¥916 trillion.

To utilize the companies’ internal reserves for improving nursing care for the elderly and care for children, it is necessary to review the relevant systems, including the introduction of preferential taxation treatment.

Efforts are needed to utilize household assets that are unevenly concentrated among elderly people. The issuance of a special government bond, holders of which are exempted from inheritance taxes, may be one promising option. If the bonds bear negative interest rates — set at a level that would not cancel out the tax benefit — the burden of interest payments on the government’s fiscal condition will be lower than that of issuing ordinary deficit-covering bonds.

From a medium-term perspective, it is necessary to rebuild the comprehensive reforms of social welfare and taxation, including an increase of the consumption tax rate to 10 percent.

To compile this proposal, writers who have expertise in the area, from the Editorial Bureau, the Editorial Board and Yomiuri Research Institute, repeatedly discussed and exchanged opinions with outside experts.

“As we face a society with a decreasing population caused by a falling birthrate and aging population, the comprehensive proposal that covers a wide range of topics raises very important issues. I want to express my respect for that,” he said.

An indicator of to what extent the gross domestic product can be increased by best utilizing three factors: capital and resources for producing goods and services, the labor force and the use of technology and know-how to boost productivity. While the GDP growth rate is largely influenced by short-term factors, such as consumer spending, the potential growth rate is said to be a growth rate that can be realized in medium-term and long-term perspectives. It is believed to indicate the nation’s real economic power.

Certified facilities with functions of both kindergartens and day care centers for preschool children that fulfill central government criteria. They accept children aged 5 or younger regardless of whether their parents have jobs, providing both childcare and education for infants. They also offer assistance to parents and children in local communities. They were instituted in 2006 and there are about 4,000 facilities nationwide. Jurisdiction was previously split between the education ministry and the welfare ministry, but the Cabinet Office has managed the facilities in an integrated manner since fiscal 2015.