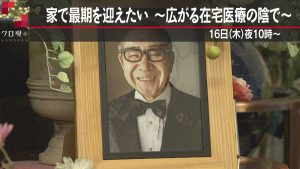 NHK’s “Close-up Gendai Plus” reported on elderly people living out their last days at home instead of in the hospital, which the government is promoting in an effort to reduce healthcare costs. Many problems have surfaced as a result of this initiative, including patients suffering from emotional distress because of inappropriate treatment by doctors who care for them at home. Such problems stem from a major shortage of experienced doctors who are able to provide house calls in Japan. The program reported on efforts to provide better at-home care, such as having special assistants accompany doctors on house calls.