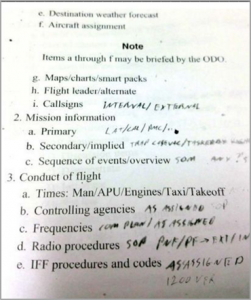 This morning’s two major Okinawa papers carried follow-up reports on the crash of the Osprey in shallow waters off Nago City last December, highlighting speculation by a group of Japanese journalists and military affairs analysts that the aircraft probably made an emergency landing while conducting low-altitude flight training using night vision equipment instead of aerial refueling as explained by the U.S. military. The group reportedly reached this conclusion based on what it believes is a U.S. military checklist that washed ashore at a spot some 20 kilometers from the impact site. Because the document includes under the “mission information” section such acronyms as NVD (night vision device), LAT (low altitude training), CAL (confined area landing), and TRAP (tactical recovery of aircraft and personnel), the analysts suspect that the Osprey was heading either toward or away from helipads in the Northern Training Area or Ie Jima Auxiliary Airfield for night rescue training . The manual reportedly bears the title “NATOPS” (Naval Air Training and Operating Procedures Standardization), a document that pilots are required to carry with them on all flights.