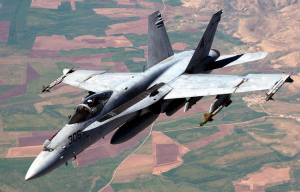 “Defense News” (online edition dated Feb. 6), an American military news weekly published by the Defense Media News Group, disclosed that 60% of the U.S. Navy fighters stationed at the Naval Air Facility (NAF) Atsugi in Kanagawa Prefecture may be unable to fly. The journal reported on the miserable state of the U.S. Navy, revealing that many FA-18 fighters – stationed in Japan for its defense – are inoperable.

The journal reported that due to an insufficient defense budget, the U.S. Navy’s ships, which number approximately 300, are becoming inoperable one after another. In fact, one nuclear-powered submarine has already been decertified, and five more are expected to become incapable of performing their missions within this year, the journal said.

Among a total of about 1,700 navy airplanes, 53% are no longer able to fly. As for the FA-18, the figure is 62%. Due to the budget deficit, the navy has been unable to maintain its vessels or airplanes or to provide necessary parts for them.

Vice Chief of Naval Operations Bill Moran testified at a meeting of the House Armed Services Committee held on Feb 7, saying, “Due to insufficient budget, combat capabilities have declined by 14% over the period from 2001 to 2015,” corroborating the report. It remains to be seen whether the new Trump administration will abandon the Budget Control Act implemented by the Obama administration that mandates reduction of the defense budget , and if it will, when it will do so.

If the 62% of inoperability figure is applied to the NAF Atsugi in Kanagawa Prefecture where carrier-based airplanes of USS Ronald Reagan (homeported at Yokosuka) are deployed, then about 30 of the total of FA-18s are unable to fly.

A flattop usually carries four squadrons. If only 20 FA-18s are operable, this means only two flight squadrons are functional. Under the circumstances, an aircraft carrier, which boasts overwhelming airpower, will be at 50% of its fighting potential. In this way, the U.S. military’s capacity to defend Japan is brought into question. Furthermore, insufficient flight training may lead to aircraft mishaps.

Citizen’s group “Yamato City Peace Committee” checked FA-18s’ flights based on their tail numbers for three months from November last year to January this year. As a result, the group found that two airplanes never flew, and eight planes flew one to three times. There were 23 FA-18s that did not fly for more than 14 straight days, indicating few FA-18s are operable.