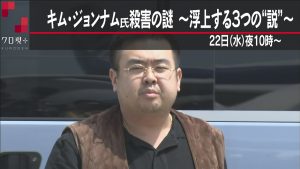 NHK’s “Close-up Gendai Plus” reported on the murder of Kim Jong Nam, saying that it is strongly believed that the act was carried out by North Korean agents. The program looked into why Kim was murdered now, saying while some speculate that Kim was assassinated to “prune” unnecessary branches of power, others suspect that Kim Jong Nam was in control of North Korea’s foreign currency unbeknownst to Kim Jong Un. The program also reported on speculation about growing moves among North Korean defectors to establish a “government in exile” with Kim Jong Nam as a leader, quoting an expert as saying: “It would be extremely unpleasant for North Korea if Kim Jong Nam were to become the leader of a government in exile. If the North Korean regime were shaken, Kim Jong Nam, the son of Kim Jong Il, would be a person of great importance. Kim Jong Un needed to get rid of his brother in a hurry.”