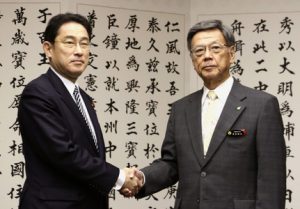 Most Monday papers wrote that Foreign Minister Kishida held a meeting with Okinawa Governor Onaga at the prefectural government office on Sunday. The governor stated that it is extremely regrettable the U.S. and Japanese leaders confirmed at their recent summit meeting that Henoko is the only solution for Futenma relocation. Onaga submitted formal requests for the central government to cancel the Henoko plan, end operations at the Futenma base within five years, relocate the base out of Okinawa, and cancel the Osprey deployment in Okinawa. Kishida reportedly told the governor that local understanding is essential for the U.S. military to be stationed in Japan in a stable manner and that the GOJ will make efforts to reduce the base-hosting burden on Okinawa in a tangible manner. The foreign minister also explained the U.S.-Japan agreement in January that clarifies the scope of the civilian component covered by the SOFA. Nikkei wrote that the governor continued to demonstrate a confrontational stance despite the fact that the foreign minister traveled to Okinawa to meet with him. Yomiuri added that Kishida later held talks with Okinawa Area Coordinator Lt. Gen. Nicholson and agreed to cooperate in reducing the base-hosting burden on the prefecture.